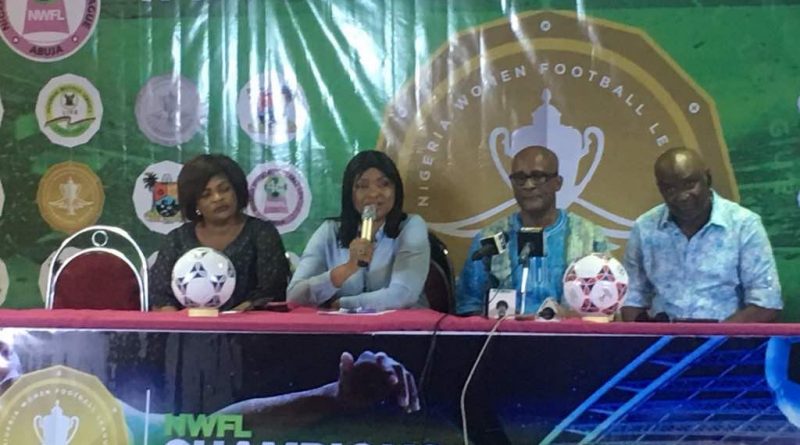 The Nigeria Women Football League (NWFL) on Wednesday announced that the maiden NWFL Champions Shield will hold on Sunday, March 4 at the Agege Township Stadium in Lagos.

First of its kind in the history of women football in the land the NWFL Champions Shield is the celebration of the very best of Nigeria Women Football League where the two best teams from the out gone season square up against each other to determine the true champions of the women football for the season in view.

The football fiesta is designed as a showcase event for both the old, new and potential fans to appreciate the quality of the women’s game and to attest, too while our league remains the best in Africa, and the bedrock for the successes of our national women teams internationally.

The NWFL Champions Shield is a curtain raiser to herald the new NWFL season and is therefore the first silverware to be contested for by the two best teams in the league today.

This competition will feature the champions of the 2016/17 league season/Super 4, Nasarawa Amazons and the 2017 Aiteo Cup winners, Rivers Angels.

Speaking in a press conference in Lagos on Wednesday to unfold the package for the football event, the NWFL chairperson, Aisha Falode said the innovation is part of the board’s drive to give the league a solid footing and the needed flavour to attract potential partners for the beautiful brand – women league.

“This is a top class NWFL programme by all standards and it promises to live up to its billing. The Champions Shield will be contested for by the league champions, Nasarawa Amazons and Aiteo Cup winners, Rivers Angels. You can call it a revenge match you will not be wrong considering how the Lafia women almost reduced the Garden City side to ball boys in the 2017 NWPL Super 4 in Benin City.

“Lagos populace is certainly going to witness what they have not seen previously about women football when the two sides confront each other at the Agege Stadium on Sunday, March 04.

“This is another wonderful opportunity for us to showcase the football loving Nigerian populace especially the football loving people of Lagos state, our hosts, the beauty and quality of our women league as well as demonstrate to the corporate world the benefits of partnering with us and how ready we are to make such partnership work mutually.

“The advantage and importance of football cannot be over-emphasised in the world today especially to the development of the girl-child knowing the meaning and benefits of the popular phrase – catch them young.

“The NWFL will engage the young girls in a one day event using football as a tool to engage, educate and empower them.

“That’s our CRS mentorship talk to the girl-child as it concerns education and sports. Over 1000 girls are expected.

“A UEFA research report released last year submits that ‘girls that play football are more confident than girls that play other games, or no games at all, we will therefore work assiduously to spread the gospel of football for girls as a tool to equip the girl-child for a purposeful life ahead.

“To do this successfully, we will collaborate with like-minded organisations and brands, so as to make this drive a very effective one nationwide,” said Falode.

The chairman, Lagos State Sports Commission, Dr Kweku Tandoh said the state’s support for the NWFL programme is in line with its expansive programme to move sports forward leveraging on the women football.

“Lagos State supports for the NWFL is in line with it’s avow programme to move sports forward in the state.

“His excellency, Akinwunmi Ambode did not hesitate to buy into the Aisha Falode NWFL led board because of his conviction in using sports as a potent tool to drive the human development campaign of the state as well as making the state a hub of sports in the country.

“The state will gladly consider hosting the NWFL Champions Shield once again should the league body ask for it.”