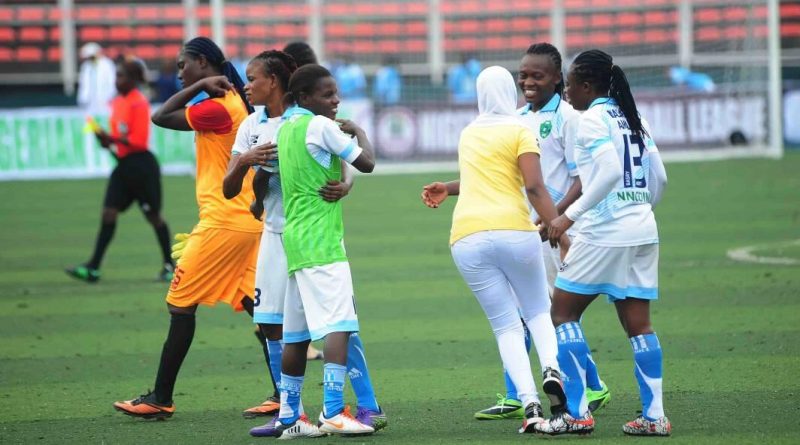 The event is part of activities on ground for the on-going Nigeria Women Premier League (NWPL) Super 4 competition at the Samuel Ogbemudia Stadium in Benin City, Edo State, Nigeria.

The NWFL board vice chairman, Margaret Icheen was at the the College with her members, NWPL Super 4 teams, the Edo state FA team and journalists for the inspiring and motivational talk show.

Icheen who took turn to address the students both in the junior and senior colleges told the highly charged and excited students that they can always excel in life by combining education and sports as ably shown by the inspiring achievements recorded by the key NWPL Super 4 teams’ players in the entourage.

She said, “We are here to encourage you to take your education serious as well as involve yourselves in football mostly as girls.

“Unlike what you may have heard in the past that it is almost a taboo for girls to engage themselves in football not only is the perception erroneous and misconceived the truth remains that you can excel in education and football as well as become a celebrity in the society.

“We have in our midst national teams and club sides players who are first and foremost girls who are educated as well as excelling in their chosen career as professional footballers.

“Disabuse your minds from any misconception that girls who engage in football are wayward they are on the contrary responsible and most cherished personalities in the society.”

Rivers Angels and Super Falcons goalkeeper, Tochukwu Oluehi spoke to the students in like manner buttressing the fact that football made her what she is today and encouraged the girls that they could as well be like her by taking seriously to their education and football.

“Here we are as girls like you and footballers, we went to school and we are involved in football.

“We are celebrity in the society and we have equally achieved a lot for ourselves, we are not whores but responsible members of the society.

“Believe it football cannot make you irresponsible but endear you to the high and mighty in the society so we charge you to take your education serious and take to football as well,” Oluehi said.

Nasarawa Amazons captain and defender, Mariam Ibrahim admonished the students on the enduring benefits of combining education and football.

She said, “You cannot do football if you are not intelligent so football is not for the indolent but brilliant students.

“So take it seriously with your education and get involved in football the sky will just be the starting point in your life.”

Nasarawa Amazons and Super Falcons defender, Sarah Nnodim who spoke passionately on the theme ‘Football-Fusion, Football and Education told the students point blank that they can always become whoever they want to be in life by combining the two key factors in right proportion.

Rivers Angels forward, Catherine Kenneth equally took time off to talk to the students using herself as an example of somebody education and football have helped greatly in life.