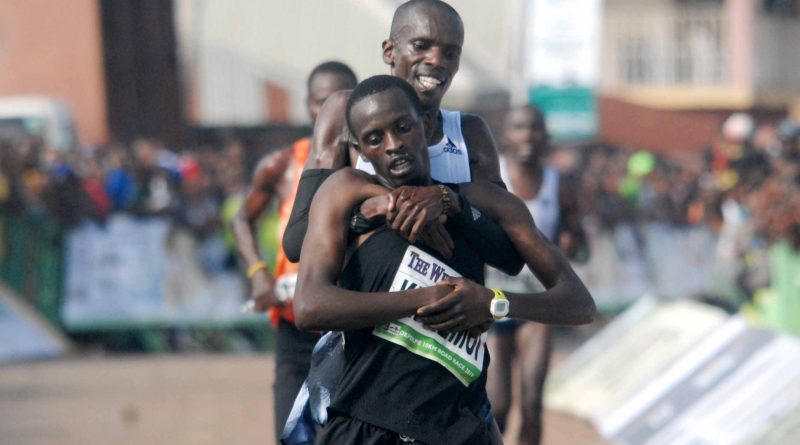 Promoter of the Okpekpe international 10km road race, Mike Itemuagbor, has hailed Kenyan athlete, Simon Cheprot for his heroic feat at the 7th edition of the race which held last Saturday in Okpekpe, Edo State.

Cheprot who won the Okpekpe race men’s title in 2016 and was first runner up last year won the hearts of fans both at the venue and those watching live on television across the African continent when he stopped to help a rival who collapsed towards the end of the race.

Cheprot helped his colleague across the finish line before beckoning on the medical team at the finish for aid.

The Kenyan was rewarded with $10,000 for his humanitarian effort and Itemuagbor says what Cheprot did is the true definition of sportsmanship.

He said, “Simon (Cheprot) may not have fulfilled his ambition of becoming the first athlete (man or woman) to win two Okpekpe titles since 2013 when we began this race but he came to Okpekpe this year, ran and left as the hero. He did not win any medals but he won hearts.

“While running, his colleague collapsed and on instinct, Simon picked him up; held tight to him and lifted him. That ended his race. But he saved life. In 2016, Simon came first at Okpekpe; was second last year. Now, in 2019, he won hearts: One of our partners gave him $2,000, former Edo State governor, Adams Oshiomole added $3,000 before Edo’s deputy Governor, Philip Shaibu increased the reward from $5000 to $10,000 with an additional $5000. But most of all, everybody hailed his “brother’s keeper” attitude. This is what is called sportsmanship. Simon gave proper consideration for fairness, ethics, respect, and a sense of fellowship with his competitors. He is our hero; he is the hero of the seventh edition of the race.”

Bahrain’s Dawit Fikadu (28.48) and Kenya’s Sheila Chelangat (32.59) won the men’s and women’s titles while a couple, Emmanuel Gyang and Deborah Pam emerged the best Nigerian athletes at the event.