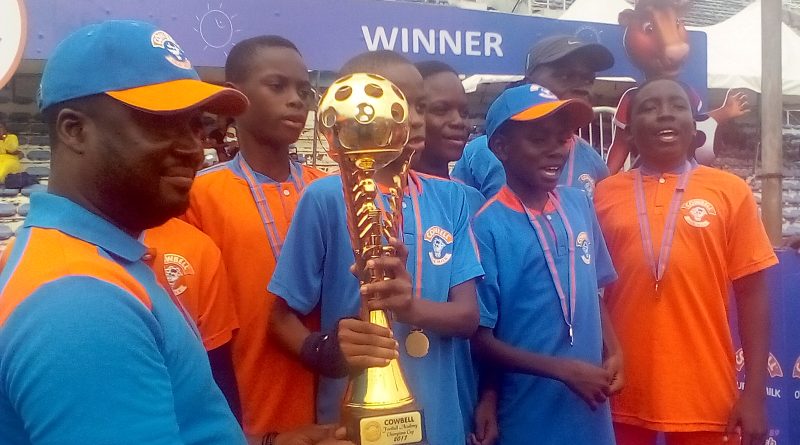 Adeyinka Akintunde
Former Super Eagles and FC Barcelona defender, Gbenga Okunowo has commended the Cowbell Football Academy for having a successful summer camping. He led some ex-Nigeria internationals is asking other companies to join in the sponsorship of the academy insisting “there are various talents that are discovered.”
He spoke on Saturday at the final ceremony of the 2017 Cowbell Summer Camp at the National Stadium, Lagos, Extrasportsnigeria.com reports.
Okunowo said it would be a good idea for more coaches and scouts to come into the academy and select players for the age-grade national teams.
“I believe that the Cowbell Football Academy is good for development of the kids, as it is a foundation for those that are going into professional football in future. I commend Godwin Dudu-Orumen for this initiative. If other companies can also join in the sponsorship this and other projects that develop kids’ football, it will be good. The kids have been kept busy for the past three weeks and this is a foundation for the U-15, U-17 and U-20 competition.
“We did not enjoy this luxury in our days, and it will be good for the kids that are here now to utilize this chance. I will also suggest that more scouts come in here to select players that will represent the country.
Similarly, former Super Eagles player and Shooting Stars coach Franklin Howard expressed delight at the academy. He urged Cowbell to keep the good work going.
He said, “I see quality players here and I am impressed. I appreciate Cowbell for this good work and hope that they keep it up. This summer camp has been a success, better than last year’s edition, and I expect more next year.”
The event rounded up with awards presented to the Most Valuable Player of the camp, won by Obinna Ogbon and Stephen Keshi prize for Outstanding Player in Leadership qualities, which Oprah Ogbona won.
Vincent Essien, a parent who participated in the football match, before his son substituted him is also happy with the programme. It is like a family tradition. “My son has been part of Cowbell for the past four years, and it has been a good one. I will just say that this is the best way to develop sports in the country.”