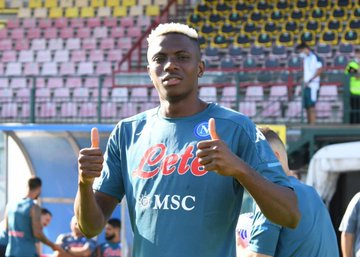 The club on Monday released the detail programme for their pre-season period Napoli on their website.

It reads: “From today begins Napoli’s summer retreat in Castel di Sangro aimed at preparing for the 2020/21 championship.”

Napoli have had their first training session in Abruzzo on Monday afternoon while lining up two friendly matches in the days ahead. Osimhen was fully involved with the Monday training and scoring at the session.

The first of the matches is billed for Friday while the other friendly will be played on September 4 confirmed against third tier side Teramo. Napoli confirmed that the first phase of their pre-season camping will end on that Friday, September 4.

Osimhen is expected to play the two test matches.

His transfer to Napoli is reportedly worth €70m but could rise to €80m because of the add-ons.