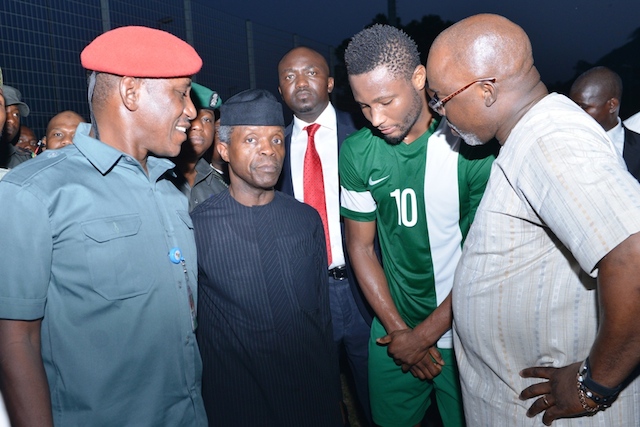 Nigeria’s Acting President, Yemi Osinbajo, on Wednesday met behind closed doors with the President of Nigeria Football Federation, Amaju Pinnick and some NFF members, reports Extrasportsnigeria.com. The meeting was held before the commencement of the weekly Federal Executive Council meeting. The meeting was called at the instance of Osinbajo.

FIFA had on Tuesday threatened to suspend the Nigeria and Ghana football federations over government interference with effect from August 20 if the issues bordering on interference were not resolved.

Pinnick who just returned to the country after leading a CAF inspection team to Cameroon was accompanied by his First and Second Vice Presidents Seyi Akinwunmi and Shehu Dikko; the General Secretary of the NFF Dr. Sanusi and Aisha Falode of the women’s league. A person familiar with the meeting said the meeting was very fruitful.

“The Acting Pres is very vast and informed about the NFF situation and the sanctity of the respect of treaties. The issues were elaborated with documented evidence for reference and it was quite a meaningful meeting,” one of the persons familiar with the meeting said.

Osinbajo also met with the Minister of Sports, Solomon Dalung, at the Presidential Villa, Abuja. The meeting was held inside Osinbajo’s office shortly after the FEC meeting.

The world football governing body, Federation of International Football Association, had threatened to sanction the country if the crisis was not resolved quickly.

The NFF team were later joined by the Head of the Technical and Development Committee Ahmed Fresh, Gusau and Alkali also held a meeting with the reconciliation committee set up by the sports minister. The meeting lasted into hours.

The Federal Government is expected to make a profound statement on the NFF this week.