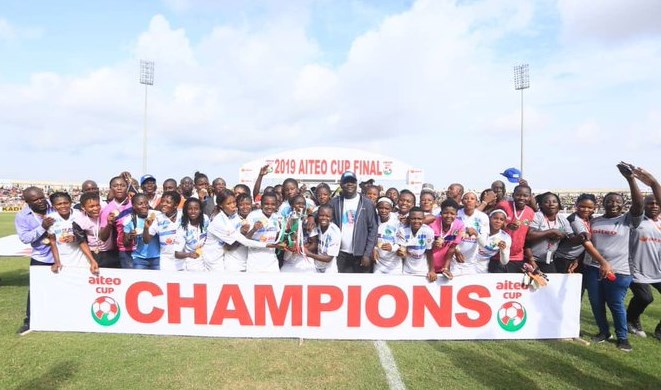 Kano Pillars defeated Niger Tornadoes in a penalty shootout to lift the Aiteo Cup 2019 on Sunday at the Ahmadu Bello Stadium, Kaduna. The two teams were losing finalists in the last two editions of the competition.

The match’s in itself lacked quality and was compromised by inaccurate passing, wayward shooting and comical finishing, leading to a scoreless encounter after regulation time.

Pillars’ Auwali Ali was the first to test goalkeeper Mustapha Aliko with a grounder after eight minutes, but the goalie held firm. In the 13th minute, Tornadoes’ Reuben Ogbonnaya drove a 20-yard free kick wide off mark, and two minutes later, Auwalu again headed tamely over the bar. On the dot of half time, substitute Yusuf Maigoro’s teasing cross found no connection.

In the second half, Pillars were marginally more ambitious, but a string of free kicks by captain Rabiu Ali failed to find target. In the 70th minute, Maigoro, with only the keeper to beat from a counter attack, shot over the bar. In the 76th minute, substitute Gyemini Abashiya hit his shot a little wide, but Tornadoes should have taken it on the dot of time, had Eri Frimpong not been feeble with his attempt in front of goal.

In the ensuing penalty shoot-out, Rabiu Ali opened scores for Pillars but Saib Dosso responded well. Chris Madaki and Mohammed Hussaini wasted their kicks, as did Adamu Hassan and Reuben Ogbonnaya. Yaro Bature and Victor Dennis then scored for Pillars, as did Eric Frimpong and Obinna Jacob for Tornadoes.

In sudden death, Pillars’ defender Emmanuel Anyanwu made good from the spot, but Ayo Adetola booted his kick over the bar to hand the trophy to the boys from Kano.

The result accomplished a first win of Nigeria’s National Cup competition for Pillars, and the first time in 66 years that a team from Kano would emerge victorious, after Kano XI’s triumph in 1953.

In the ladies event, Nasawara Amazons barred Rivers Angels from a fourth successive Women AITEO Cup triumph by beating the Cup holders 5-4 after penalty shoot-out in the grand finale at the Ahmadu Bello Stadium, Kaduna also on Sunday.

The girls from Lafia were marginally the more enterprising in a rather dull encounter which finished scoreless, and penalty shoot-out was the direct consequence according to competition rules.

Ifeoma Paulinus scored Rivers Angels’ first kick from the spot, as did Amarachi Okoronkwo for the Amazons. Skipper Ojini Amaechi netted for Angels and Vivian Ikechukwu then scored for the Angels, before goalkeeper Uchenna Chinedu saved from Chiwendu Orji and Mary Saiki scored the winner for Amazons to make it 5-4 from the spot.