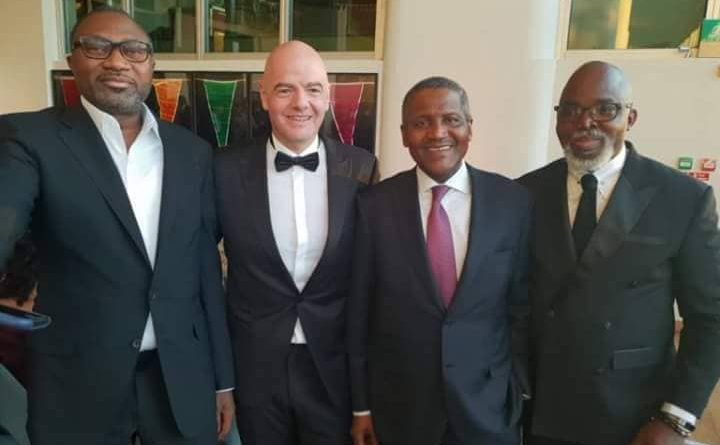 President of the Nigeria Football Federation, Amaju Melvin Pinnick has spoken further on why he invited business moguls Aliko Dangote and Femi Otedola to the FIFA Best Awards ceremony in London on Monday night, Extrasportsnigeria.com reports.

Dangote, who holds Nigeria’s second highest national honour (GCON) is the President of Dangote Group and is ranked as the richest person of African descent in the world. The Dangote Group has interests in various commodities in Nigeria and other African countries. Alongside oil baron Otedola, Dangote was conspicuous at the Awards, and both met with FIFA President Gianni Infantino and the major icons of world football in the British capital.

Pinnick said, “Alhaji Dangote is perhaps the biggest business brand in Africa, and one of Nigeria’s leading Ambassadors. I am very happy to be in a position to invite himself and Otedola to such an event of global stature and essence.

“As a nation, it is important that we continue to showcase our best brands in all fields. Doing this enhances the stock of our country globally. Alhaji Dangote and Mr. Otedola were happy to meet the world’s top governors of football and the football governors were also happy to meet them.

“Our objective as a Football Federation is to attain financial autonomy so that the Government can channel resources otherwise taken up by football into other critical sectors, and we believe that if we have persons like Dangote and Otedola partnering with Nigerian football, we will get there faster.”

A notable football, Dangote is reportedly worth over $15 billion.

Pinnick, who is also the 1st Vice President of the Confederation of African Football added, “The NFF has invited Alhaji Dangote to a couple of matches previously, including the friendly match with England in London before the FIFA World Cup in Russia, but he was unable to attend. Now, we are discussing with him on a relationship with Nigerian Football and he is showing immense interest.”

Aiteo is Nigerian Football’s biggest partner, with a five-year agreement for payment of coaches of the various national teams, sponsorship of the annual AITEO Cup for men and women and sponsorship of the annual NFF/AITEO Awards. It can be recalled that Pinnick also invited Benedict Peters, who is the Executive Vice Chairman/CEO of AITEO Group to the last FIFA Best Awards ceremony in London. He was represented by Francis Peters, his deputy. This year, AITEO was represented by Executive Director, Andrew Onyearu, as Peters was in New York to receive an award for the company from Forbes magazine.

“Football has tremendous capacity to be self-sustaining and even contribute significantly to the national GDP. That is the station we are targeting at the moment.