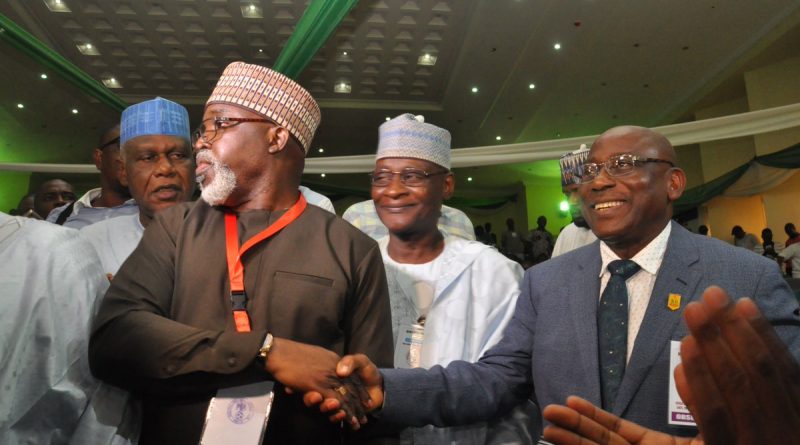 Chieftains of the Nigeria Football Federation, including its President, Amaju Melvin Pinnick, have been discharged and acquitted on all counts of alleged corruption charges in a case brought by the defunct Special Presidential Investigation Panel, SPIP.

The panel, headed by Okon Obono-Obla who is now on the run to avoid prosecution by the Independent Corrupt Practices and Related Offences Commission, ICPC had filed a 16-count charge against Pinnick, Seyi Akinwunmi (1st Vice President), Shehu Dikko (2nd Vice President), Mohammed Sanusi (General Secretary) and Ahmed Yusuf (Executive Committee member) with wild claims of alleged corruption against the men. Among the charges were misappropriation of the sums of $8.4million and N4billion, conflict of interest and non-declaration of assets.

At a point, now-fleeing Obono-Obla wrote to the Confederation of African Football, CAF twisting all the facts with regards to Nigeria’s participation in the CAF Congress of 2015, NFF officials told the media.

On Tuesday, Justice Ijeoma Ojukwu dismissed the entire case with all 16 charges, and acquitted the NFF chieftains in consideration of the submission of the defence and the prosecution and in line with the rules of administration of criminal justice.

The clean bill is a confirmation of the position of the NFF on all allegations of corruption against its officials. Nigeria’s supreme football-governing body had always insisted that its leaders were being victimized by persons who lost elections through the ballot and were seeking other means to upturn things at Glass House, or disgruntled individuals simply on a mission of vendetta.

Only last month, a motion by the Economic and Financial Crimes Commission, EFCC to remove the names of Pinnick and Sanusi from the witnesses’ category and add them to the list of accused persons in a case at the FCT High Court over the same $8.4million FIFA Grant was put on hold after the Office of the Attorney General of the Federation submitted that it was taking over the case with a view to ascertaining its validity, seeing that same persons were being charged spuriously in different courts and/or investigated by several agencies over the same allegations hewed out of petitions by the same individuals.

At the court on Tuesday, a counsel from the Office of the Attorney General of the Federation, which had taken over the case, said it could not proceed with the matter as the proof of evidence could not sustain the charges. NFF’s counsel adduced reasons why the charges could not be sustained:

1.  The SPIP Investigation Report dated April 30, 2019 filed in the Honourable Court as Exhibit 7 in the Proof of Evidence and its Findings as contained in page 13 to 21 cleared the NFF officials of all allegations, based on the petition investigated by the Panel.

2. A review of the certified true copy of the NFF Bank account with the Central Bank of Nigeria found that there was no transaction of N4Billion or any amount whatsoever on November 3, 2018 as alleged in the charges filed by SPIP. It was also found that the total inflow into the said NFF account for the whole of 2018 is far less than N1billion, confirming that the alleged N4billion never existed anywhere in the first instance.

In the circumstances, the Defence Counsel applied to the court to dismiss the charges and also discharge and acquit the NFF chieftains, since the proof of evidence could not sustain the charges. The AGF office counsel did not have any objection to this submission by the defence.

The judge then ruled that in view of these facts, she had no option than to discharge and acquit the defendants on all counts, wondering why the case was brought to the court in the first place.

Defence Counsel, Barrister Sani Katu, put the issues in perspective: “The matter was adjourned till today to allow time for investigation as to whether the defendants should be arraigned or not by the Office of the Attorney General which had taken over the matter. The Office of the Attorney General went and investigated the matter and discovered that the proof of evidence could not sustain the charges. On that basis, the Office of the AGF applied to withdraw the charges and the consequence is that the defendants should be discharged and acquitted from all 16 charges, to which the court agreed.”