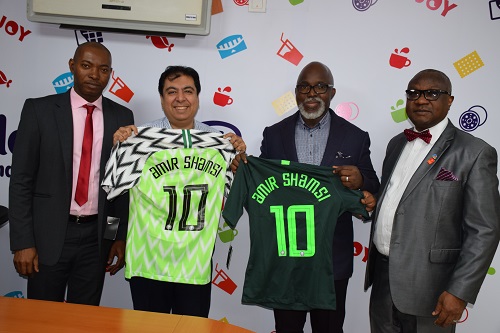 Cadbury Nigeria Plc, manufacturer of TomTom, the nation’s number one candy, has congratulated the Super Eagles on the team’s qualification for the 2019 African Cup of Nations (AFCON) tournament, which will take place in Cameroon.

The celebration message got to the Eagles camp just before the Nigeria Football Federation President, Amaju Pinnick visited the company to say a hearty thank you for their support to the Eagles and the federation.

In a statement, the Company’s Corporate and Government Affairs Director for West Africa, Mr. Bala Yesufu said the Super Eagles have made Nigerians proud by securing the AFCON 2019 ticket. Yesufu assured Nigerians that TomTom, the Official Candy of the Super Eagles, is with the team all the way to Cameroon.

TomTom, an ardent supporter of the Super Eagles, gave out free candies to all the fans in Uyo, the Akwa Ibom State capital, last month, during the match between the Super Eagles and the Mediterranean Knights of Libya. Nigeria won the match 4-0.

Yesufu said: “We are excited that Nigeria will be competing again in AFCON after missing out on two successive editions. The Super Eagles have shown strength of character, resilience, and tactical discipline throughout the qualifiers. We have no doubt that this youthful team will make us proud in Cameroon.”

He also commended the Nigerian Football Federation (NFF) led by Amaju Pinnick, Eagles Manager, Gernot Rohr, and the rest of the crew, for providing an enabling environment for the players to excel, noting that this has paid off.

Meanwhile, TomTomhas emerged winner of the ‘Best Digital Campaign in Nigeria,’ at the Advertisers Association of Nigeria (ADVAN) award, which held over the weekend in Lagos. Bala attributed this achievement to the holistic exploitation of TomTom as the Official Candy of the Super Eagles, which was executed across major media platforms including Digital.