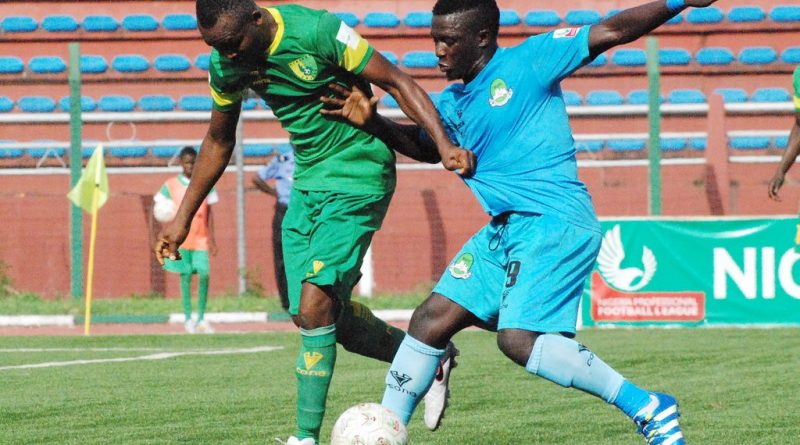 Plateau United have continued their unbeaten start to the season as they held Gombe United to a goalless draw in Gombe in one of five matches played on Wednesday in the Nigerian league.

The Jos-based team are now two points clear of Rivers United at the second spot and the Rivers team have also remained unbeaten following a deserved goalless draw against FC IfeanyiUbah in Nnewi.

The biggest winners on Wednesday were Lobi Stars of Makurdi who notched their second win in as many home games in a comprehensive 3-0 bashing of newly promoted ABS FC at the Aper Aku Stadium.

Striker Kingsley Eduwo’s first half goal put Lobi en route to victory before the former Sunshine Stars striker completed his brace on the dot of 90 minutes. There was still time however for Nwangwa Nyima to open his Lobi account in stoppage time.

In Ibadan Shooting Stars Football Club of Ibadan survived a scare to draw 1-1 against the Mountain of Fire and Miracles Ministries, at the Lekan Salami Stadium, Ibadan, in the Nigeria Professional Football League on Wednesday. Sikiru Olatunbosun, who before the match said he was confident of victory for the Olukoya boys indeed scored on 45 minutes before Adebayo Abayomi equalised on 89 minutes from the penalty spot for the hosts. It was a match where many chances to score were wasted.

In close by Akure, Sikiru Alimi’s late goal from a rebound after his penalty was initially saved by Kano Pillars goalkeeper Danladi Isa was all Sunshine Stars required to edge out Pillars in a tight contest. Pillars’ former Sunshine Stars goalkeeper Isa had kept out a first half penalty by Peter Iyamu.

Former Champions, Enyimba Football Club failed to find the back of the net against neighbouring side, Abia Warriors, as the game ended goalless. FC IfeanyiUbah also drew 0-0 to Rivers United.

In Maiduguri, El-Kanemi Warriors left it late before stealing a lone goal victory over Katsina United. Substitute Sunday Anthony’s acrobatic finish in stoppage time ensured El-Kanemi win for the 15th time at home in a row since returning to Maiduguri last season.

Akwa United have remained winless after four games as they were held to a goalless draw by reigning champions Enugu Rangers.