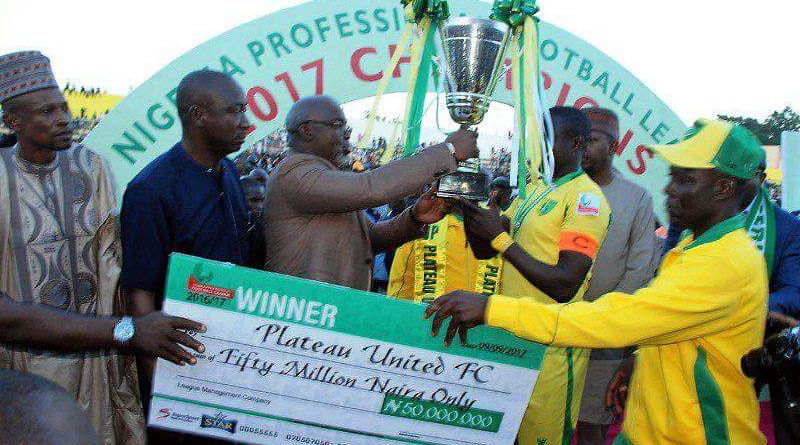 Plateau United have been crowned the champions of the 2016/17 Nigeria Professional Football League. The Jos based team achieved their first ever title glory after beating the immediate past champions, Rangers 2-0 in Sunday’s final day played at the Rwang Pam Township Stadium in Jos.
The Plateau team got the top prize money of N50m and the trophy handed over to them by the President of the Nigeria Football Federation Amaju Pinnick. They secured 66 points to stay above Mountain of Fire Miracles Ministries FC who were beaten 2-1 at El Kanemi Warriors in Maiduguri.
The two teams will represent Nigeria in the next Africa’s elite club championship, the CAF Champions League.
Plateau’s Ckukwuemeka Umeh scored the match opener in the 26th minute and Benjamin Turba got the match winner off a loose ball inside the box in the 89th minute.
In Calabar, seven-time Nigerian champions, Enyimba confirmed their Confederation Cup ticket with a 1-0 win against Katsina United to end the season’s campaign on the third spot on 61 points.
One of Nigeria’s oldest clubs Shooting Stars Sports Club (3SC) and Abubakar Bukola Saraki (ABS) FC where unlucky against their final day opponents, Niger Tornadoes and Nasarawa United respectively as they joined the already demoted duo, Gombe United and Remo Stars who were already relegated before the final game.