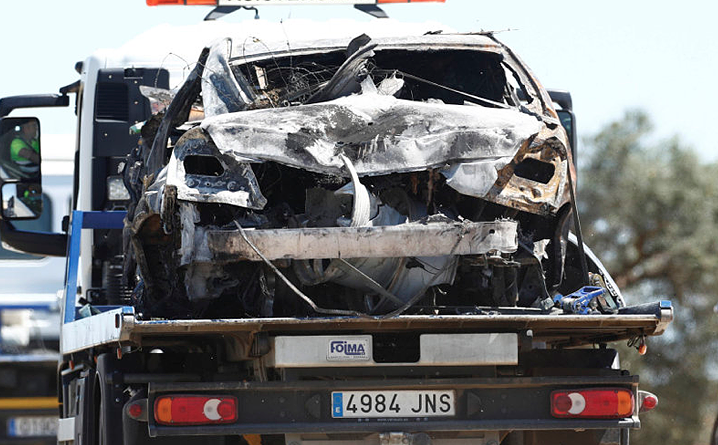 JOSE Antonio Reyes is feared to have been travelling 120mph when he was tragically killed in a car crash.

Arsenal legend Reyes – one of the so-called Invincibles – died Saturday after his Mercedes Brabus S550V crashed on the A-376 motorway close to Seville.

Spanish media reports investigators believe the footballer may have been doing around 120mph in the smash.

The 35-year-old is also believed to have been at the wheel of the car when it crashed, according to a Daily Star.

His cousin Jonathan Reyes, 23, a back seat passenger, also died along with a third man called Juan Manuel Calderon.

Reportedly the third man suffered first degree burns to 60 per cent of his body as he was rushed to Virgen del Rocio hospital in Seville.

Although the exact speed was yet to be determined as part of an official investigation.

The accident happened at 11.45am as Reyes and his pals were returning from a training session at his club Extremadura, to his home in his native Utrera near Seville.

Tributes have poured into the Arsenal legend who was a key part of their undefeated side who went on the win the Premier League in 2003/04.

Reyes’ former club Sevilla announced on Saturday the Spanish winger had died in a traffic collision, while Henry said he was “devastated to hear the sad news”.

Reyes made his professional debut with Sevilla at the age of 16.

He then moved to Arsenal in January 2004 for £17 million and was part of the famous Invincibles.

Arsene Wenger signed Reyes for Arsenal, and he told the club on Saturday: “I am devastated to hear the terrible news about Jose.

“To his family and friends, all support from everyone in the Arsenal family. He will remain forever in our hearts.”

The Spanish Football Federation (RFEF) has announced that the seven Segunda Division games scheduled to be played on Sunday would now be held on Tuesday evening following Reyes’ death.

Extremadura, for whom Reyes had made nine appearances since joining in January, were due to play at Cadiz on Sunday in what is the penultimate round of regular-season fixtures.