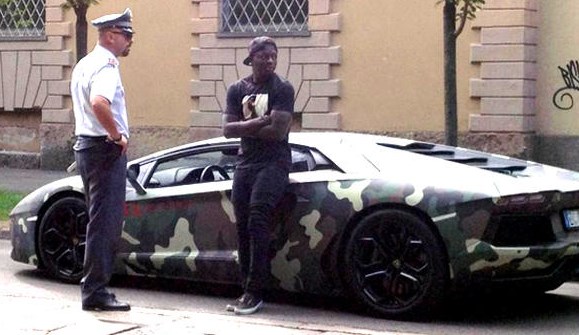 Ghana’s Sulley Muntari has had his £150,000 supercar seized by cops in a row over unpaid instalments. The English FA Cup winner – who had his Portsmouth spell crowned by a 1-0 Wembley win over Cardiff – owns a luxury car garage but he has lost a motor due to missed payments, according to The Sun report.
The footballer won legions of fans when a video emerged of him handing out money to desperately poor children in Brazil. But he now appears to have fallen on hard times of his own.
Muntari, 33, also had a loan spell with Sunderland six years ago but his career took a dip when he was released by Serie A club Pescara in May.
Reports in Italy now claim police stopped the 33-year-old in his Mercedes AMG 63 at Chiasso, on the Swiss border, after a leasing company said he had failed to keep up payments. They are said to have impounded the former Inter and AC Milan star’s luxury SUV.
Local media quoted Muntari as saying, “It’s true I am behind with the payments.
“I am going through some very difficult times, but I will sort everything out as soon as possible.”
However the player’s legal adviser released a statement claiming the mix-up was simply caused by an unread letter.
Massimo D’Onofrio said, “This matter is down to a letter from the leasing company that got lost in the post.
“Mr Muntari didn’t know about the letter, and he is working to resolve the situation straight away.
“He wishes to stress that he would never spend the sort of money to put himself in difficulties.”