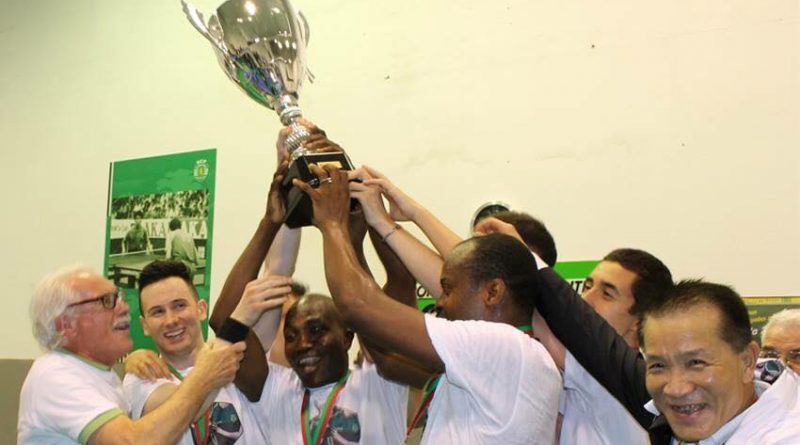 Nigeria’s duo of Aruna Quadri and Bode Abiodun celebrated the Portuguese league title with Sporting after the Lisbon-based team defeated CD São Roque 3-0 in the second leg of the play-off final held at the Estadio Multiusos Pavilion José Alvalade in Lisbon.

Since joining Sporting from GD Toledos in 2015, Aruna Quadri has remained unbeaten in the league winning all the three titles at stake per season for the Lisbon-based club.

This weekend’s title makes it the 18th title for the Nigerian since moving Portugal in 2010.

At his former club – GD Toledos, Quadri won nine titles four seasons and now he has matched the record at Sporting after winning his ninth titles at the weekend.

Sporting defeated CD São Roque 3-0, in the second leg of the play-off Final, at the Estadio Multiusos Pavilion José Alvalade to be crowned the league champion at the weekend.

The Sporting team known as the “leonina” team had already won the first leg 3-1 in a match that took place in Funchal. This year’s title is the 35th title to be won by Sporting in the Portuguese Division One of Men’s National League. The venue of the second leg in Lisbon – Pavilhão de Alvalade was filled with enthusiastic fans that supported the team throughout the match. In the first game, the pair formed by Aruna Quadri and Diogo Carvalho had no problems beating the duo of Nuno Henriques and Zhao Tianming 3-0. Sporting’s João Monteiro returned to play against Zhao Tianming and after losing in the first leg in Madeira, Monteiro nearly faced same difficulties but the Portuguese international needed five sets to win the Chinese star. Quadri dismantled Tiago Li 3-0 to complete the 3-0 rout by Sporting.

The trophy was presented by the president of the Portuguese Table Tennis Federation, Pedro Miguel Moura, and by the chairman of the General Assembly Board, Inês Louro.

Apart from the league title, Sporting remains the only in Portugal to have featured in the ETTU Champions League and also set a new record of making it to the semi-final stage of the lucrative tournament.