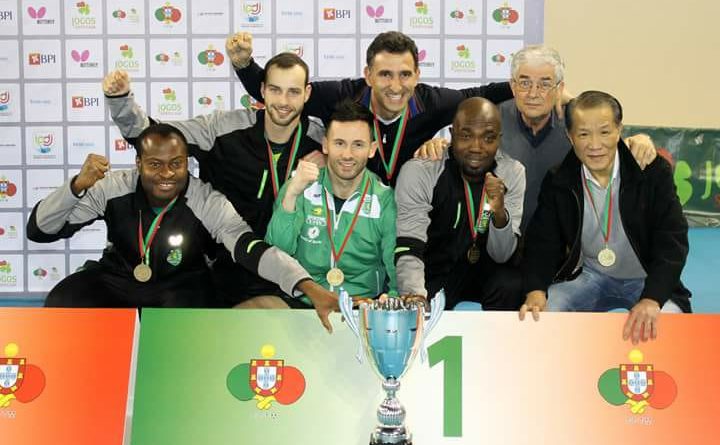 Aruna Quadri has continued his career fine form for Sporting. The Nigerian led his team to retain the Portuguese Cup played at High Performance Centre in Caldas da Rainha over the weekend.

Quadri started the win against ADC Ponta do Pargo with a 3-0 (11-7, 11-9, 11-8) after beating Énio Mendes to give Sporting the confidence going into the second match.

Since joining Sporting two seasons ago, Quadri has always been instrumental to the team dominance of the Portuguese winning everything at stake in the league as well as becoming the first Portuguese team to feature in the ETTU Champions League. They were also able to make it to the quarterfinal of the championship.

An excited Quadri said after the victory that he was happy winning the title again with Sporting as the team prepares for this week’s Champions League quarterfinal tie against a French team.

He said, “I am happy that we were able to retain this title because we worked hard for the title. It was not an easy win because every team in the league is now getting quality players and I must thank the management of Sporting for the huge support. We will be playing the first leg of the ETTU Champions League this week against France’s Stella Sporta La Romagne and I hope that the win would help our confidence going into the Champions League quarterfinal match on Friday.”

Over 99 teams made up of 83 men and 16 women participated in this year’s championship while CTM Mirandela retained the women’s title after beating GDCS Juncal 3-0 in the final. CTM Mirandela had earlier beaten CD São Roque 3-0, while Juncal beat ADC Ponta do Pargo 3-2.

The Portuguese Cup has been disputed since 1967, with Sporting (men) and Atlético da Amadora (women) being the first winners.