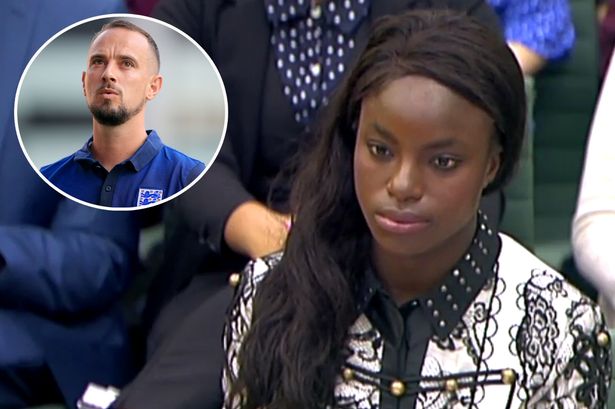 Eni Aluko has told the Digital, Culture, Media and Sport select committee that she feels “vindicated” following the FA’s apology after English football’s governing body admitted she was one of two players subjected to racist abuse, Daily Mirror reported Friday.

The FA had previously cleared Sampson in two separate investigations before eventually sacking him after it was claimed he had “inappropriate” relationship with a player while in a previous job at Bristol academy.

“I feel vindicated,” said Aluko. “I feel relieved. It suggests it was all kind of worth it. ”

“I’ve felt isolated in terms of the process; I didn’t want it to become as adversarial as it has become – the Football Association vs Eni Aluko. That disappoints me, what it has become.

“I haven’t spoken to many individuals that I used to speak to at the FA. As for support from the Professional Footballers Association, I have had unwavering support.

“In terms of friends, in life you realise your strongest friends are and who some aren’t. Lianne Sanderson has been a very good friend of mine and a team-mate. I cannot say I have been completely isolated. It’s been difficult, but I’ve been supported in some areas.

“Without the PFA support, I wouldn’t be sat here and probably wouldn’t have got the result I got today.”

Aluko’s words, speaking at the DCMS hearing on Wednesday, came after Martin Glenn’s statement apologising to both Aluko and Drew Spence.

Aluko, a qualified lawyer, submitted a 114-point document to the DCMS within which she reveals that FA chief Glenn wanted her to put out a statement declaring the organisation was “not institutionally racist”. Aluko says that the request – made to her at a recent meeting with Glenn – was “unwarranted and unreasonable” and has seen the FA refuse to pay a financial settlement already agreed between the two parties.

“I felt that was bordering on blackmail,” Aluko told the DCMS. “I categorically refused to write any statement.”

Aluko also told the DCMS that she had been ignored by the FA technical director Dan Ashworth when she questioned Sampson’s treatment of her.

“I felt that I could go to Dan Ashworth – I spoke to Dan Ashworth personally and briefly and said “Dan, I’m struggling” and would like to have a meeting with you about how Mark Sampson is managing me.

“That meeting never materialised. Even after the culture review I was ignored by Dan Ashworth.”

And Aluko called FA chairman Greg Clarke “dismissive and disrespectful” following his 14-word response to the PFA which read ““I’ve no idea why you are sending me this. Perhaps you could enlighten me?”, after the organisation had sent him a six-page document that accused the governing body of sabotaging Aluko’s international career in order to protect Sampson.

Glenn’s statement, which saw the FA chief make an embarrassing U-turn and admit that the England duo were subjected to racial abuse declared, “On behalf of The Football Association I would like to sincerely apologise to Eniola Aluko and Drew Spence.

“Based on new evidence submitted to independent barrister Katharine Newton, she has now found that they were both subject to discriminatory remarks made by an FA employee. This is not acceptable.

“In her final report Katharine Newton concluded that on two separate occasions Mark Sampson made ill-judged attempts at humour, which as a matter of law were discriminatory on grounds of race within the meaning of the Equality Act 2010. Katharine Newton did however conclude that Mark Sampson was not racist.

“She also concluded that there was no evidence to support the allegations that Eniola Aluko was subjected to “a course of bullying and discriminatory conduct” by Mark Sampson.

“Our ambition has always been to find the truth and take swift and appropriate action if needed. It was our decision to have the original, second and final investigation to ensure that due diligence was taken. It is regrettable that Eniola did not participate in the first external investigation as this would have enabled Katharine Newton to conduct and complete her investigation sooner.

“We will fully support the recommendations from the report.”