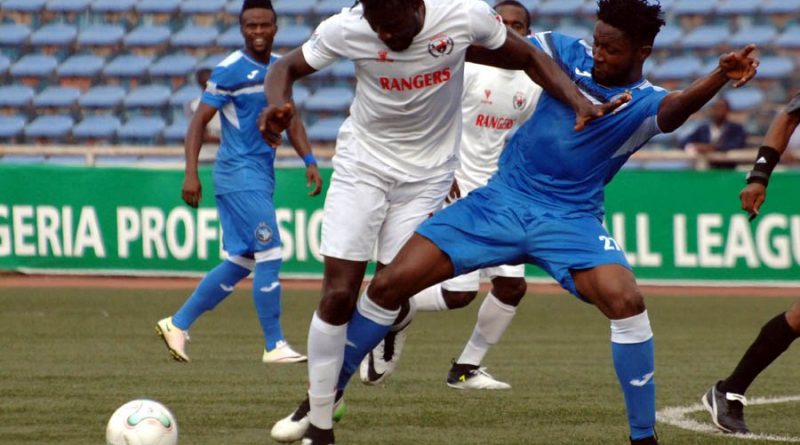 The much advertised game at the Nnamdi Azikwe Stadium in Enugu lived up to the billing as Enugu Rangers defeated eastern rivals Enyimba 1-0 in a Nigerian league match played on Sunday.

The only goal of the match was scored by Bright Silas in the fifth minute.

Rangers had a serious challenge in the 31st minute when goalkeeper Femi Thomas, who incidentally once represented Enyimba, sustained an injury and was replaced by Ghanaian Nana Bonsu. It thereafter became a game of suspense as the score did not change until the final whistle.

The game that had the highest effect on the league table was played in Makurdi where Lobi Stars moved to the top after beating Katsina United 1-0 also at the Aper Aku Stadium.

David Tyavkase scored the winner for Solomon Ogbeide’s men in the 69th minute which ensured Lobi now have 23 points.

Yobe Desert Stars are yet to concede a goal at home this season.

Pillars defender Joel Djondang scored an own goal in the 24th minute, while Abdulmalik Mohammad made the points safe with the second goal 19 minutes from time.

A hat-trick by Nafiu Kabuga gave the hosts the win against the Port Harcourt club.

Champions Plateau United were beaten 1-0 by Niger Tornadoes at the Bako Kontagora Stadium, Minna while MFM thrashed Heartland 3-0 at the Agege Stadium.

FC IfeanyiUbah and Abia Warriors played a 1-1 draw. Go Round defeated Sunshine Stars 1-0 in Omoku with Okon Otop scoring the winning goal in the 34th minute.