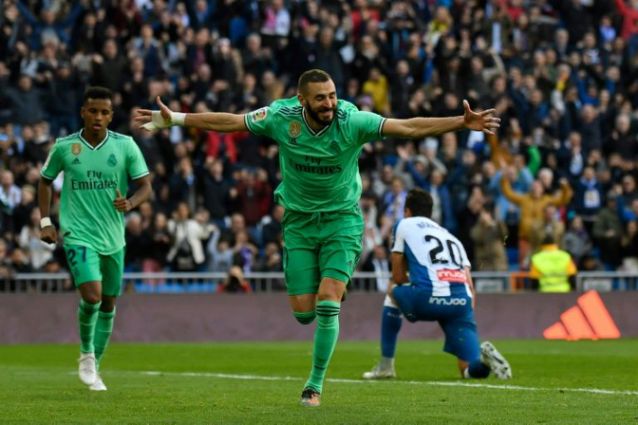 KARIM BENZEMA’s strike Sunday night fired Real Madrid to a 2-1 victory over Real Sociedad; top of the La Liga and into the driver’s seat in the title race.

Benzema’s goal gave Madrid the chance to leapfrog Barcelona at the Spanish summit.

But there were suspicions of handball as he brought down the cross with the very bottom of his shoulder, much to Sociedad (and Barcelona’s fury), The Sun reported.

VAR saw nothing wrong, however, and Zinedine Zidane’s men marched to the top of the league with eight games to play.

Sergio Ramos hobbling off with a knee injury will be a worry for Zidane on an otherwise good night at the office.

The Real Madrid captain coolly rolled home a penalty early in the second half to break the deadlock, but limped off minutes later holding his knee in an injury worry with games coming thick and fast.

The door was opened for Los Blancos to return to the top of the table by Barcelona’s 0-0 draw against Sevilla on Friday night.

Zidane made three changes to the team that beat Valencia last time out with Marcelo, Vinicius Jr and James Rodriguez all stepping in.

It meant a rare night off for Eden Hazard, and another omission for outcast Gareth Bale.

Vinicius was the star of the show when Real Madrid beat Barcelona 2-0 in El Clasico before lockdown to seize control of the title race – only to lose at Betis days later.

And the 19-year-old was the danger man in the Basque Country on Sunday night, looking a constant menace in the first half.

With the sides level at 0-0 at half-time, Vinicius’ mazy run earned Zidane’s side a penalty right at the start of the second period.

The Brazilian teen was clipped by Diego Llorente, and Ramos took charge from the spot to make it 1-0.

But Sociedad were left aggrieved by 90 seconds where they were denied a goal and conceded a controversial one.

Substitute Adnan Januzaj thought he’d levelled when he fired past Thibaut Courtois from 20 yards, but the offside flag was up as a team-mate obstructed the goalkeeper’s line of sight.

And Real added insult to injury by going up the other end and doubling their lead in the 70th minute.

Benzema controlled a cross in from the right on his shoulder, set himself and wrong-footed goalkeeper Alex Remiro.

Sociedad players furiously appealed for a handball but the referee, and latterly VAR, waved away the protests.

Los Blancos went top on head to head record with eight games left to play, and Zidane knows his side are in a fight until the very end with Barcelona.

He said: “I’m very happy with the victory itself. The three points are the most important thing.

“It was always going to be difficult but we played very well out of the back I believe. They’re a very intense team and always press well.

“It was difficult towards the end but we fought and ran until the end. We have players who show character in tough moments.

“We have eight games left – eight finals to play – and we have to keep playing right until the end because things won’t be decided in the next game.”