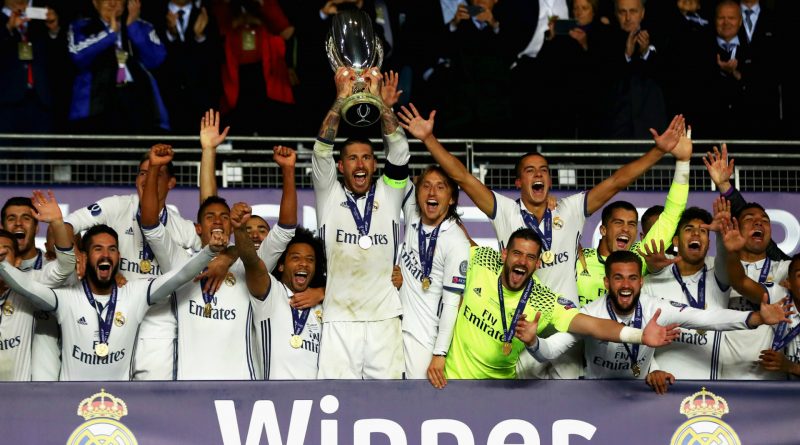 (5-1 on aggregate)
Zinedine Zidane expanded on his incredible record as a manager on Wednesday night as he won his second trophy of the 2017/18 season, before the Spanish league has even begun The Guardian reports.
The suspended Cristiano Ronaldo wasn’t needed, nor even worthy of mention in the end, as Real Madrid saw off their arch rivals easily, doing so without several key players in a match which will leave Ernesto Valverde along with the Barcelona board, players and fans, worried about what they can realistically hope to achieve this season.
Real Madrid began the first half pressing high and hard, showing a desire and energy to win the ball – and keep it – that Barcelona just couldn’t match. Samuel Umtiti was forced back towards his own goal from kick-off and any attempts to play out from the back were closed down quickly and with purpose.
Valverde’s decision to abandon the usual Barcelona 4-3-3 was an attempt to deal with the giant Neymar shaped hole that has been left on the left wing but his decision to start with a 5-3-2 was surprising. A confused, nervous display in the first half may have revealed how little time they have spent working on the system during a packed pre-season. It soon unraveled.
With four minutes on the clock, the electric Asensio found himself in space 25 yards out from goal and launched an unstoppable bending, swerving, dipping shot over Marc-Andre ter Stegen. It crashed into the goal, leaving the net and the Barcelona defence visibly shaken.
Unsurprisingly, Lionel Messi was probably the only of Valverde’s 11 men who looked in any way assured in possession or capable of genuinely threatening the Real back four, and he took it upon himself to help the team carve out opportunities, by doing it all on his own.
Barcelona failed to pass out from the back (as if they’d even consider clearing their lines), Busquets was caught in possession and Benzema stole in behind Umtiti to control Marcelo’s low cross, and from the resulting flick, swivelled and powered a low shot past ter Stegen. Barcelona’s defenders stood staring like statues. Game over.
There was little change in the second half with Real sitting a little deeper and allowing their visitors more of the ball. There was a brief spark as Messi sprinted onto a cushioned pass from Suarez, dribbled into the box and found himself one-on-one with Keylor Navas but even he couldn’t finish the chance, striking the ball high and onto the crossbar.