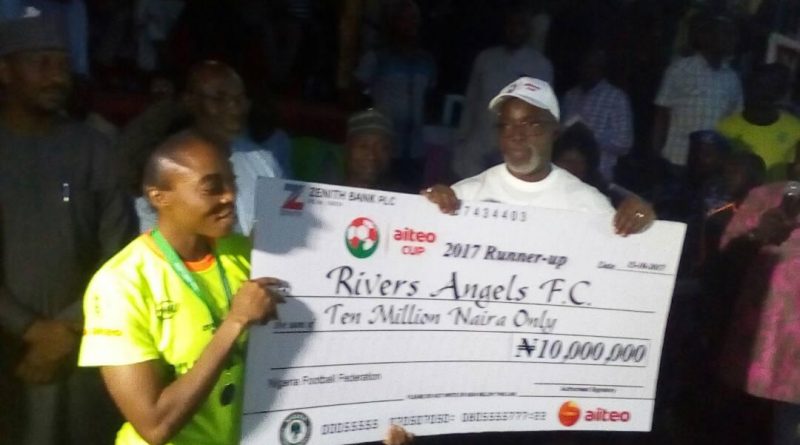 Rivers Angels defeated Ibom Angels 4-1 on penalties after the fulltime score stood at 1-1 in Wednesday’s Aiteo Cup final clash at the Rwang Pam Stadium in Jos to claim their Cup seventh title.

Angels forward Cynthia Aku gave the side the lead in the 49th minute while defender Glory Ogbonna evened scores for the Ibom Ladies in the 53rd minute to end the hotly contested encounter one goal apiece.

Rivers Angels coach Edwin Okon then told SuperSport that the team’s Nigeria Women Premier League (NWPL) Super 4 failure served as a tonic for the side to win the women’s Aiteo Cup. He praised God for helping the Port Harcourt side win the Cup back to back.

“The poor NWPL Super 4 performance challenged us greatly as we were not expected to perform so poorly in the competition. After the NWPL Super 4 disappointment in Benin it looked like everything had ended for us.

“However, I charged the players to forget about the Super 4 disappointment and concentrate fully on the Aiteo Cup. That did the magic and we thank God for granting us our heart’s desire.

“The joy of winning the Aiteo Cup is quite overwhelming and more rewarding is the personal award of the best coach of the championship to me.

“Ibom Angels are a good side coming this far to play in the final for the first time but I think the better side won on the day.”

The Port Harcourt side earned N10m while the runners-up took home N5m.