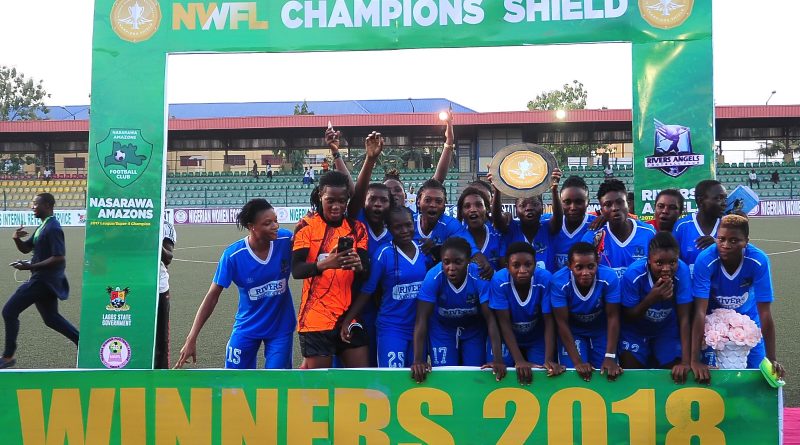 The Aiteo Women Confederation Cup winners, Rivers Angels of Port Harcourt, emerged the first ever winner of the NWFL Champion’s Shield when they defeated league champions Nasarawa Amazon’s 4-3 by penalties. The match was played on Sunday at the Agege Stadium in Lagos.

The Angels scored first in the encounter before the Amazon’s levelled up scores in the second half. The match ended 1-1 at regulation time. The Angels coached by Godwin Okon won by penalties 4-3.

The wife of the Lagos State governor, Bolanle Ambode, represented by Abosede Ogundinmu presented the Champion’s Shield to the Angels.

The NWFL board headed by Aisha Falode, presented a recognition award to Governor Ambode.

But on the night before the game was played, the Congress of the Nigeria Women’s Football League passed a vote-of-confidence on the chairperson Falode.

Congress resolved that Falode’s exemplary leadership had “moved the league board to greater heights” especially with the Edo State government-sponsored NWPL Super 4 and Lagos-sponsored Champions Shield.

The Congress believes that Falode’s constructive style would help the Amaju Pinnick-led NFF to get a very strong sponsorship package for the Women’s League.

The NWPL 2018 League will kick off April 7 with the opening league to be played between Nasarawa Amazons and FC Rodo.