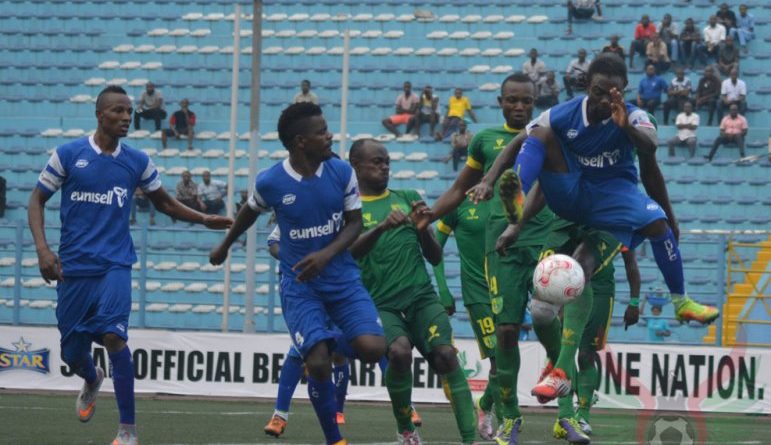 Rivers United defeated Kano Pillars 2-1 in a Nigeria Professional Football League game played on Sunday in Port Harcourt. Bakary Bamba and Guy Kuemian scored on either side of half time to inspire Rivers United to the win.

In-form Junior Lokosa scored Pillars’ consolation just after the half hour mark as the Pride of Rivers overpowered ‘Sai Masu Gida’ 2-1 in a compelling contest decided at the Yakubu Gowon Stadium, Port Harcourt.

It was billed as the Star Match of match of the day and it did live up to expectations.

The big news before kickoff was that veteran goalkeeper, Sunday Rotimi would make his season’s debut following a complete recovery from a groin injury that side-lined him for United’s two opening NPFL games against El-kanemi Warriors and Plateau United.

Ali Chiwendu replaced Zoumana Doumbia at left back while Guy Kuemian, Olalekan Gabriel and Markson Ojobo all got the nod to start following substitute roles and exclusion from the match day squad in the 2-0 defeat to champions, Plateau United four days earlier.

United started briskly and should have taken the lead on 18 minutes when Prince Aggrey found space on the right but could only hit the side netting with the Pillars’ goalkeeper, David Obiazor doing well to narrow the angle.

The pressure from the home side continued in relentless fashion and barely 60 seconds after Aggrey failed to score, United took the lead in exhilarating fashion.

An enthralling team move saw Ojobo break free on the right hand channel and the marauding right back proceeded to deliver an inch-perfect cross to the onrushing Bakari Bamba who connected sweetly with a first time volley that flew into the top corner past a shell-shocked Obiazor.

It was a world-class goal that saw the stadium erupt in mass hysteria but Pillars were back on level terms, 14 minutes later, albeit against the run of play.

A moment of defensive blunder culminated in a badly-cleared header falling in the path of marksman extraordinaire, Lokosa.

The forward could barely believe his luck and proceeded to fire a fearsome effort into the roof of Rotimi’s net.

There was to be no more scoring in an exciting first half that lived up to the pre-match hype but the hosts knew that they had to up the ante in the second half to amass maximum points.

United’s technical manager, Stanley Eguma spoke to the club’s official website, www.riversunitedfc.com.ng after the game and said, “We studied our opponents and at half time, we discussed their loop holes and the areas where they were giving us problems.

“I spoke to the players and told them that we had to up our game and they heeded to the instructions.”

Pillars’ captain, Chinedu Udoji said, “Congratulations to Rivers United for their three points but we (Kano Pillars) did not play well today. That is the honest truth because this is not how we play.

“Today (Sunday) was not a good day for us; we just have to go home and plan and focus on our next game.”

Sunday’s result means that United move up to eighth on the log with six points from a possible nine while Pillars have amassed four points from their first three matches.