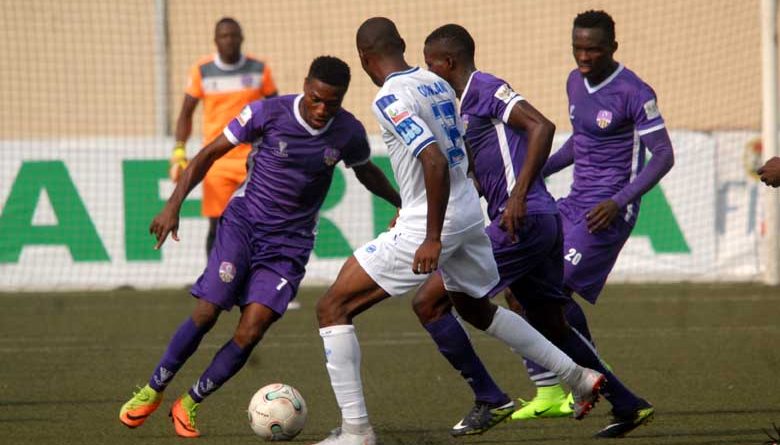 Ossy Martins and Esor Nelson were the goal scoring heroes for United who now move up to third on standings having started the day in fourth, according to Rivers United FC website, www.riversunitedfc.com.

United coach, Stanley Eguma handed recalls to Bakary Bamba, Kunle Odunlami and captain Festus Austine who all missed the club’s last game – the 2-0 win over Adamawa United in Gombe a week ago.

United settled faster but it was the visitors who had the first real opportunity to open the scoring.

Oriyomi Lawal sprang the offside trap but saw his half chance from the edge of the box easily saved by the United goalkeeper, Darlington Ovunda, who has now kept clean sheets in his last two games.

United then took the game by scruff of the neck but found goal scoring chances hard to come by as MFM defended in compact fashion.

The hosts didn’t have to wait long though for their first clear goal scoring moment and it arrived in the 17th minute.

Quick passing between Martins and Ishaq Rafiu freed up the unmarked Esor who saw his exquisite chip beat Folarin Abayomi in the MFM goal but only kissed the roof of the net.

Chigozie Ihunda was the next to try his luck as his fiercely struck effort produced a fine save from Folarin.

The impressive Esor caused panic in the MFM back line with some control and dare devil dribbling before passing with precision to the unmarked Gopey Michael who somehow managed to fluff his lines at the opportune moment in the 22nd minute.

United then took the lead their overwhelming dominance deserved when Martins rose unchallenged to head home Ihunda’s precise free kick just before the half hour.

The visitors were reeling at this point and the home side twice came close to doubling their money in a frenzied 90-second period after they netted the opener.

Martins and Esor however failed to hit the target with headers on both occasions.

Ishaq was the next Rivers United player to come close to scoring, this time, in the 29th minute as he waltzed past his marker before seeing his shot saved by Folarin.

There was only one Horse at the races and United continued knocking on the door in search of the second goal.

Bakary Bamba caused mayhem in the MFM rear guard in the 39th minute when he sped down the byline only to shoot straight at Folarin with the unmarked Martins and Gopey well placed to make a simple tap in.

Two minutes later, Ishaq’s free kick from the edge of the MFM box was saved by Folarin.

Barely a minute later, Rivers came close again when the imperious Esor completely hoodwinked the MFM defence and produced a pass of genius to Ishaq whose well-struck effort, seemingly destined for the bottom corner, got deflected for a corner.

United kept up the intensity in the second half and almost scored straight from the restart with some intricate passing releasing Martins who disappointingly shot straight at the keeper from point blank range.

It was a premonition the visitors failed to heed as the hosts scored from their next attack.

Gopey should have made it 3-0 in the 61st minute but he shot wide from four yards when faced with a gaping goal.

Martins was the next to come close for the marauding hosts a minute later but he shot straight at the MFM goalkeeper from a promising position.

MFM then had a rare attack, Adeyinka Najeem firing firmly enough but he met Ovunda, largely untested in the one-sided contest, in inspired form.

United bossed the rest of the contest but there was to be no more scoring as the game finished 2-0 in favour of the richly deserving hosts.

Coach of MFM FC, Tony Bulus was non-committed in his post match comments.

Eguma on his part, praised his charges for the win.

“It was a very disciplined performance. We controlled the game from start to finish and could have scored more goals.

“I am happy with the win and also pleased that we are moving up the log,” he said.

They will face Nasarawa United in their next League game on Wednesday, January 8 at the Yakubu Gowon Stadium, Port Harcourt by 4pm.