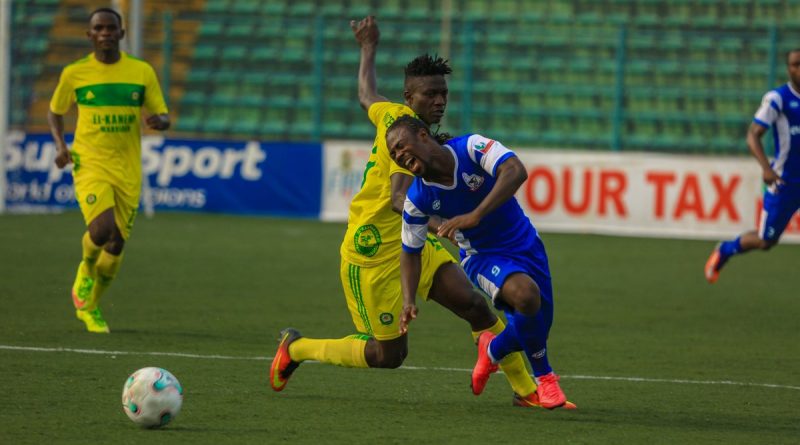 The Pride of Rivers won 1-0 against El-Kanemi Warriors in an open contest at the Yakubu Gowon Stadium, Port Harcourt on Sunday.

Kuemian latched onto a perfect through ball from debutant, Samuel Ganda on 67 minutes to smack unerringly past the El-Kanemi Warriors goalkeeper and captain, George Michael.

Mathias Samuel should have broken the deadlock in the 38th minute but inexplicably shot into the orbit when he should, at the very least, have made the Rivers United goal keeper, Robert Cole earn his stripes.

Bello Musa also came close for the visitors shortly after half time but the hosts slowly began to gain a foothold in the game with Samuel Akinbinu planting a tame header straight at goalkeeper, Michael after Chiwendu Ali delivered a pin point cross from the left. Isiaka Olawale should have equalized for the Warriors on 77 minutes but the veteran badly miscued his effort from close range when he found himself unmarked in the United penalty area.

El Kanemi had a late chance to level matters after Christian Weli lost the ball in midfield but Sule Mohammed somehow dragged his shot wide after doing the hard work of carving out space and shooting past Cole in the United goal.

Ochowechi ‘Oche’ Salefu had a shot cleared off the line in stoppage time before the referee called a halt to proceedings.

El Kanemi’s captain, Michael cut a disappointed figure at the post match press conference as he told assembled media that failure to convert the numerous chances that came their way cost them dear in the end.

“I think we wasted our chances and that’s how the game of football is. They had their chances and converted one so we just have to go back home and work on our finishing,” he said.

“I am not disappointed in the game because I know it is not easy because El-Kanemi Warriors is also a very good side but I think the (goal) we got made the difference in the end,” he told the Rivers United official website, www.riversunitedfc.com.ng.

Rivers United next face on Wednesday in Jos while El Kanemi Warriors face Abia Warriors on the same day, in Maiduguri.

The Naze Millionaires were held to a barren draw by the Owena Whales in Sunday’s clash at the Dan Anyiam Stadium. Madu said his main target for the season’s opener was an outright victory to boost the side’s confidence going into subsequent matches.

He told SuperSport, “I actually wanted us to win the first season’s match to give us the needed confidence going into the other matches. However, I thank God for the draw as it would have been worse starting the new season on a losing note.

“Of course, when you set your mind on winning and it did not happen as planned any other thing could as well happen.

“Sure there was pressure on our side to win, more especially as we were playing the first game upon our return to the top-flight at home right before our teeming fans.

“I thank God for the outcome of the clash as well as the players’ performance throughout the duration of the game.

“They played quite well and I’m highly impressed. Their performance is a great indication of good results to come in other matches.

“Their performance in today’s (Sunday) clash is a great inspiration and motivation on my own part.

“Sunshine Stars came here to play draw and they succeeded so they should be the happiest side.”

The Owerri outfit will be the guests of oriental neighbours and seven-time champions Enyimba in Wednesday’s NPFL matchday 2 clash at the UJ Esuene Stadium in Calabar.

Enyimba picked away point at Lobi Stars in the game played at the Aper Aku Stadium in Makurdi.