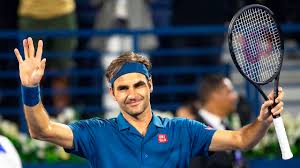 Roger Federer claimed the 100th title of his quite remarkable career with victory over Stefanos Tsitsipas on Saturday to win the Dubai Championship. He was winning the Dubai event for the eighth time.

The 37-year-old Swiss star is just the second man after American Jimmy Connors to reach a century of tournament wins – a run he started way back in 2001 in Milan.

Federer, who moves back to number four in the world, had endured a frustrating wait since lifting his 99th tour-level trophy last October in Basel, while the 20-year-old Tsitsipas was fresh from claiming the Marseille Open crown last weekend.

“I’m delighted. It’s great to win my eighth here in Dubai and in combination with my 100th singles title,” he said.

“Tough conditions and tough opponents. To win in Marseille and then come here was difficult for Stefanos.”

Since his first title as a 19-year-old, Federer has won at least one trophy in every season since with at least four titles in 16 of the past 18 seasons, including a record 20 grand slam crowns.

Only Connors with 109 titles stands ahead of him, within Federer’s reach if he can stay motivated and injury free.

Tsitsipas said: “It’s an honour to play Roger, I have been idolizing you since I was a kid, watching you on TV.

“I would like to personally congratulate you for 100. You have created history in tennis,” he said.