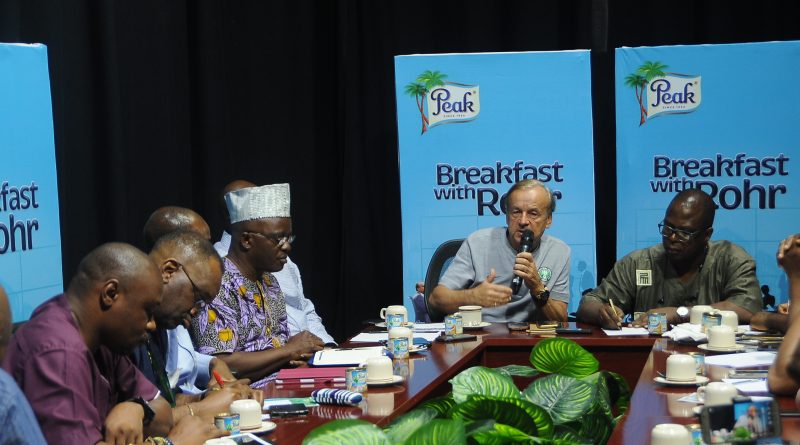 Super Eagles coach, Gernot Rohr has said his target for the 2019 African Nations Cup is to, at least, reach the semi-final of the tournament.

The former defender who this month qualified Nigeria for the Nations Cup with a match left at hand was the special guest at a Sports Editors’ Roundtable, tagged ‘Peak Breakfast with Rohr,’ which held in Lagos on Friday.

Organised by HS Media Group, owners of the HotSports brand and sponsored by Friesland Campina, makers of Peak Milk, the official Milk of the Super Eagles, the event was an interactive session between Sports Editors of selected national dailies, broadcast and online media organisations on current issues in Nigerian football.

While speaking on the programme streamed live from the HS Media’s Studio to a global audience via YouTube, Twitter and Facebook, Rohr avoided making a categorical statement of winning the 2019 AFCON in Cameroon.

Instead he said, “It is the dream of every team at the competition to win the title, but it will not make much of a sense to make a promise because other teams are also in the tournament to win.

“We have good chances to get to the semi-final at the 2019 AFCON, but we can’t be sure to win, it’s a young team, we should be realistic but once we reach the semi-final then winning the title is no longer far from us.”

On a wider range, he said he was happy Zambia did not qualify for the tournament because they are one of the strongest team in the continent. The Eagles manager is also praying to avoid Cameroon, the host nation when the draws of the continental tournament holds next year.

Speaking on his team captain, John Mikel Obi who is yet to play for the team after the Russia 2018 World Cup, the Franco-German said: “Mikel told me after the World Cup that he wants to take a break and after then he also had an injury that was why he was not invited to the squad. However, he is still the team’s captain and once he is ready to come back, he will still have a place in the team.”

Gernot Rohr also seized the opportunity of the session to clear the air on his perceived apathy to players of the Nigerian Professional Football League, saying poor organization of the league and lack of adequate training facilities are reasons home based players find it difficult to break into his team.

The well attended session is a regular feature in the series of the media event which has in the last ten years featured national team coaches such as the late Shaibu Amodu, who qualified Nigeria for the 2010 World Cup in South Africa; Samson Siasia and late Stephen Keshi, who won the African Nations Cup in 2013, South Africa.