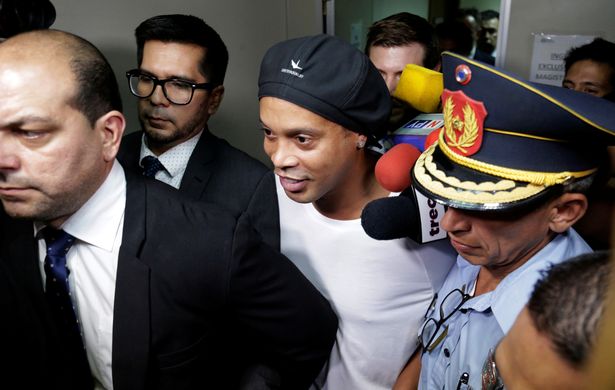 Prosecutors in the capital city Asuncion said on Wednesday that Ronaldinho and his brother Roberto Assis used fake documentation when he arrived into the country, according to Daily Star report.

Gilberto Fleitas, the head of the investigations unit of the Paraguayan police, announced on Friday that Ronaldinho and his brother were taken into custody after an alternative punishment proposal was not ratified by a prosecutor.

Fleitas told Reuters: “The detention order has been carried out.”

Ronaldinho, 39, was billed to face a judge on Saturday, who will decide whether the pair will remain detained or whether they will be freed while investigations continue.

The arrest is said to have come hours before the brothers were poised to leave the South American country.

It has been a torrid visit to the landlocked nation for the pair after they were held by police for questioning on Wednesday after presenting falsified passports on their arrival into Asuncion.

They were said to be in Paraguay to attend a charity event.

TV pictures on Friday showed the pair being taken in a police vehicle from the Sheraton Hotel to a police station on the outskirts of the city.

It was reported that the brothers recognised they committed a crime but said they did so unwittingly and were assisting the police with their enquiries.

All parties were expected to come to an agreement on Friday about the punishment that everyone involved will receive.

Speaking earlier in the week, prosecutor Federico Delfino said: “We are looking for an alternative way out of this that doesn’t result in a formal accusation and that recognises that these people were, we can say, taken by surprise.”

But the judge rejected Delfino’s recommendation and the pair were arrested.

Ronaldinho enjoyed a glittering career, winning 97 caps for Brazil and being pivotal in their 2002 World Cup win.

He won the Ballon d’Or as the best player in the world during the peak of his powers with Barcelona in 2005 before a spell with AC Milan.

He then returned back to Brazil with Atletico Mineiro in 2012 and retired after a brief stint with Fluminense in 2015.

His retirement was officially confirmed in January 2018, three years after his last professional appearance, having had a brief stint playing futsal in India.

The playmaker is one of only seven players to have won the Champions League, World Cup and Ballon d’Or during their career, Daily Star detailed.