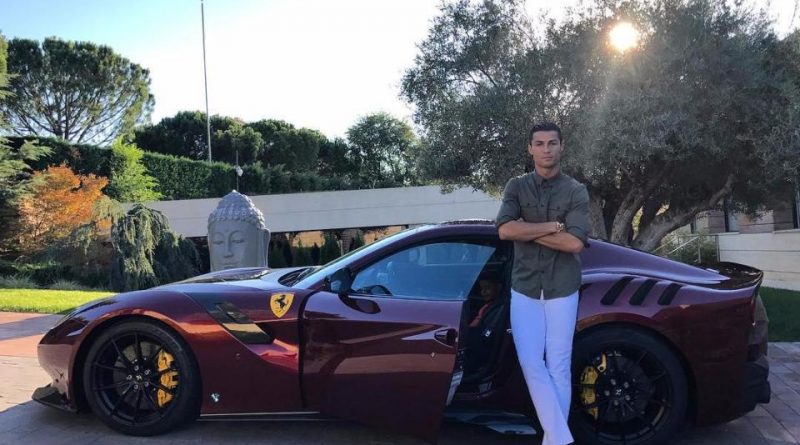 Super star Cristiano Ronaldo is expecting a baby with girlfriend Georgina Rodriguez, after only just welcoming twins Mateo and Eva Maria Dos Santos to the world. And to celebrate, the 32-year-old has treated himself to a new car – adding to his fleet of super-cars at his disposal. The Portuguese ace has just added a £339,000 Ferrari F12 TDF, The Sun reported.
The ex-Manchester United ace has a Bugatti Veyron, Aston Martin DB9, Lamborghini Aventador LP 700-4, Porsche Cayenne Turbo, Phantom Rolls Royce and an Audi R8, just a selection of 20 cars in his private garage.
However one car that is unavailable to the Euro 2016 winner is his first motor – a humble Audi A3 Couple. Bought during his Red Devils days in 2004, he put the modest car up for sale back in April for a relatively low price of £13,500, according to The Sun report.
And back in February he showed off another new purchase – a Bugatti Chiron, setting him back £2.15m.
While he bought himself a late Christmas present last year – forking out £97,600 on a top of the range Mercedes AMG GLE 63 S Coupe.
His new whip though has been lauded by critics, with supercar review website Evo describing the F12 as “pure automotive pornography.”
The TDF is surely a wonder. It boasts a 6.3-litre V12 engine, producing 769bhp, and has a top speed of over 211mph. Going from 0-62mph takes just 2.9-seconds and 0-124mph an incredible 7.1-seconds.
Ronaldo has plenty of time to play with his new toy as he has one match left to run on his suspension. His next appearance for Los Blancos will be against Cypriot side APOEL in their opening match in the Champions League group stages