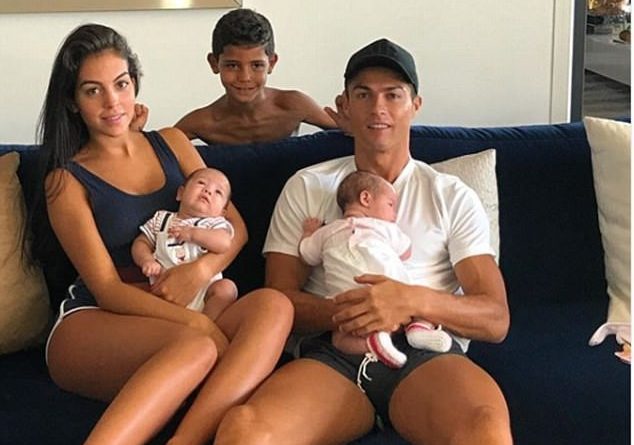 Real Madrid and Portugal football star, Cristiano Ronaldo, is proud of his expanding family as he posed with his newborn twins Eva and Mateo, eldest son Cristiano Junior, seven, and his pregnant 22-year-old girlfriend Georgina Rodriguez. The 32 year showed the world his immediate family via an Instagram post
Captioning the photo ‘family mood’, the football ace smiled as he tenderly held one of his twins while Georgina cradled the other. Little Cristiano Junior grinned as he crouched behind the back of the sofa in a Daily Mail report.
He pulled a baseball cap low over his face, and sported a glowing tan as he displayed his muscular legs in a tiny pair of shorts. Georgina, who has been dating Ronaldo since last year, showed off her laidback glamour in a pair of towelling shorts and vest.
Ronaldo revealed his hopes to have SEVEN children, after being inspired by his eldest son, seven-year-old Cristiano Junior.
The proud dad – who is also father to newborn twins Eva and Mateo – has admitted his eldest son wants six siblings, making a match in heaven for Cristiano’s CR7 fashion brand named after his initials and his football shirt number.
He is said to have made the admission during a Chinese TV interview picked up by papers in Portugal, as daily paper Correio da Manha quoted the star to say: ‘Cristiano is very happy. He’s doing well.
“He wants more brothers and sisters. He wants seven, the magic number, and I think that’s good.”
Ronaldo confirmed the arrival of his twin children via a sweet Instagram post of himself and Cristiano Junior cradling the tots and later insisted he is “very happy” after learning girlfriend Georgina is carrying his fourth child.
Georgina, who is said to be five months pregnant and expecting a girl, recently revealed how she is preparing for the birth of her little one.
In an interview with Spanish glossy magazine Hola, Georgina gushed: “I’m a real family person. I love children, nature and animals.”