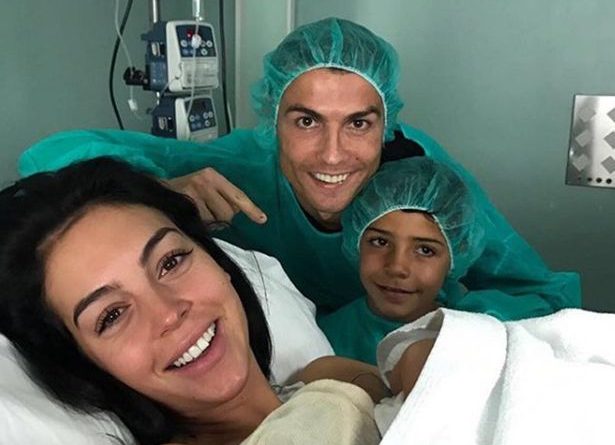 Real Madrid star Cristiano Ronaldo has confirmed that his daughter Alana Martina was safe and well after joining his ever-growing clan on Sunday.

The world player of the year announced the birth of his first child with girlfriend Georgina Rodriguez on Sunday evening on Instagram with a family photo taken at the Hospital Quiron Universal, near the superstar’s home.

“Alana Martina is just born! Both Geo and Alana are doing great! We are all very happy!” he posted on Instagram.

Alana, who cannot be seen in the picture, is Ronaldo’s fourth child.

According to a Daily Mirror report, she joins a family that recently welcomed the addition of twins, Eva Maria and Mateo, from a surrogate mother.

Oldest son Cristiano Jr was born in June 2010, but the mother has never been publicly identified. Cristiano Snr has full custody.

Rodriguez was said to be due to give birth around November 21 but was admitted to hospital earlier on Sunday.

Reports in Spain said the date was brought forward because Ronaldo was given time off from Portugal’s international break fixtures and has no club matches either until next weekend.

Ronaldo famously stayed with his Portugal team-mates at the Confederations Cup when his twins were born before being excused from his country’s third place playoff in the tournament.

The Real Madrid star said: “I chose the first name and Geo the second.

“The name of my daughter will be Alana Martina. I just wanted to share this with you. I think it is a beautiful name.”

On Saturday, Ronaldo shared an image on his Instagram page enjoying a night out with Georgina and friends, including fellow Portuguese footballers Jose Semedo and Miguel Paixao, with the caption ‘Familia’ and four love hearts.

Georgina, who is from the Spanish Pyrenees city of Jaca, was close by his side.