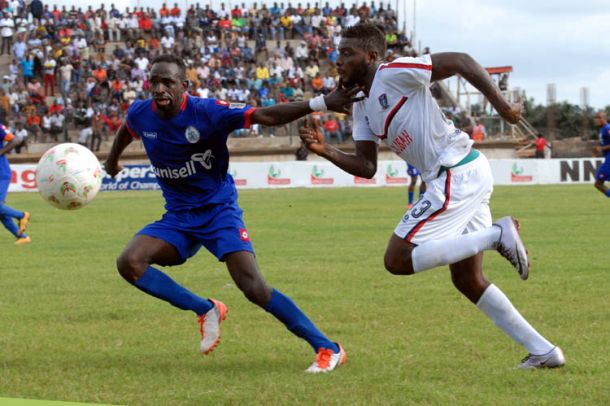 Oche Salefu scored to rescue a point for Rivers United in a 1-1 draw with FC IfeanyiUbah FC in a feisty Nigeria Professional Football League (NPFL) clash that produced two red cards on Sunday in Port Harcourt.

Ifeanyibah shot into the lead at the Yakubu Gowon Stadium in the 65th minute when Onyekachi Chidume converted a penalty, sending substitute goalkeeper, Robert Cole the wrong way.

United however hit back with four minutes remaining via Salefu’s sumptuous finish following good work by Osita Chikere, four minutes from time, as the hosts settled for a share of the spoils.

In a first half of few clear cut opportunities, the hosts were marginally better and could have taken the lead in the ninth minute when Emeka Ogbugh’s crafty attempt from a tight angle hit the side netting.

Seven minutes after the restart, United almost put their noses in front following a delightful interchange of passes between Osita and Salefu with the latter just failing to beat the Ifeanyiubah goalkeeper, Bamba Drissa from close range.

The game’s turning point arrived in the 64th minute when the United goalkeeper, Sunday Rotimi received a straight red card for a lunge on the lively Ifeanyiubah goalkeeper, Paschal Seka.

It was a moment to forget for the usually calm and collected veteran as Seka was always second best to get to the ball in the United penalty area. Rotimi was sent off and Bernard Ovoke was duly sacrificed for reserve goalkeeper, Cole.

Cole’s first task was to pick the ball out of his net as Chidume calmly sent him the wrong way from 12 yards.

United were staring the barrel, down to 10 men and trailing at home for the second time in the league this season.

The lads from Port Harcourt are however made of stern stuff and refused to go down with a whimper.

Purposeful, consistent attacking play culminated in Salefu’s delightful equalizer with the clock running down after the visitors had been reduced to ten men following Sadiq Abdulrazak’s dismissal for a second bookable offence in the 80th minute.

United almost claimed a stoppage time winner but Bamba produced an extraordinary stop to deny Osita at the death.

Coach of Rivers United, Stanley Eguma expressed disappointment with the result but praised his players for fighting back to claim a point.

He said, “It was a game we prepared to win knowing that our opponents are also a very strong side but we unfortunately could not get the three points at stake,” Eguma said in an interview with the team’s official website, www.riversunitedfc.com.ng.

“We fought very hard; the players put up a good effort and created a lot of good goal scoring opportunities but we couldn’t convert them.

“In the second half, the penalty we conceded due to our goalkeeper’s error put us in a difficult situation in the game.

“It affected our game plan but I will also commend the effort of the boys for fighting back to equalize and getting a point.”

In Akure, it was a much improved performance for the former NPFL champions, Rangers International F.C in the Match Day 11 fixture against host’s, Sunshine Stars inside the Akure Township stadium as they were forced to a 1-1 draw.

The host took the initiative as soon as referee Auwalu Rabiu from Zamfara state signalled for the start of hostilities with Ezekiel Thompson, Abiodun Joseph and Sikiru Alimi pushing the defence line of the visitors to its limit but to its credit, the Okey Odita led backline stood their ground.

Rangers’ players gradually took the game to their hosts with Ajani Ibrahim, Ifeanyi George, Bright Silas and Godwin Aguda probing the rear of the host and would have shoot into the lead on 23 minutes but Ajani shot wide when he was put through by a defence splitting pass from Tope Olusesi.

Five minutes later, Ajani turned provider of the opening goal as his well measured pass was met by Ifeanyi George who blasted past the groping hands of Ocheje Moses to send the Akure fans into surprise silence while the travelling fans went on wiled jubilations.

Ocheje, however produced a world class save on 35 minutes to deny Isaac Loute’ pile drive from nestling in the net after the left-back dribbled his way past a sea of tackling legs to pull the trigger.

Substitute, Emmanuel Sunday who came in for CHAN Eagles star, Ekundayo Ojo, did cause Rangers defenders some troubles with his massy runs and dribbles and he made Femi Thomas do some quality goalkeeping on 38 minutes to save the ‘Flying Antelopes’ some blushes.

Some slack defending by Rangers backline gave enough time and room for lanky defender, Nojeem Raji to restore parity as he nodded into a yawning net an inviting free kick from Emmanuel Sunday with only three minutes to the end of the first stanza.

Coach Olugbenga Ogunbote of Rangers said after the encounter, “It was a good game and a good result that could have been better for us. We planned to get all three points but we thank God for the one point we got. We played against a highly technical side and I give them kudos. We continue to fine tune our team and very soon, we shall get what we really want.”

Nojeem Raji Sunshine said, “It was a difficult match but we could have won the game but for some questionable calls by the referee. We hope to get the lost points soon.”

Ifeanyi George said, “I thank God for the goal and the result the team was able to get in Akure. I have been working to get my goals scoring form back and I believe it has started and there is no looking back.”