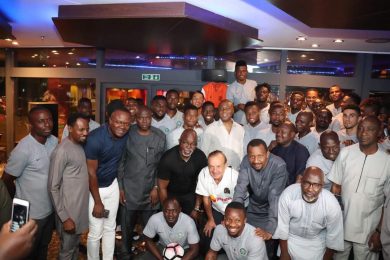 President of the Senate of the Federal Republic, Senator Abubakar Bukola Saraki (CON) on Tuesday night described the present crop of Super Eagles as the best-organized ever, as he bade them farewell to the 21st FIFA World Cup finals in Russia. He also doled out $50,000 to the team just before they left for London.

At a brief but lovely event inside the Transcorp Hilton Hotel, Abuja, Nigeria’s number three man and leading football enthusiast and financier also described the Mikel Obi-led team as compelling role models, doing their job quietly on the pitch and accepting the rewards as and when such come without holding the nation to ransom.

He said, “I have been following the performances and general behaviour of this squad. I must confess that I am very impressed. We no longer have schisms and different camps in the same camp, and you sacrifice a lot for the country without demanding so much before you go to battle.

“From the captain, Mikel Obi to the newest member of the squad, I assure you of the love of the entire country and the well-wishes of every Nigerian as you go to the FIFA World Cup and in fact, in all your endeavours.”

He also praised coach Gernot Rohr for the way he has managed the team and instilled discipline and sense of dedication.

President of the Nigeria Football Federation, Amaju Pinnick hailed Saraki for his proven love for, and support and encouragement of the three-time African champions during the FIFA World Cup qualifying race and even before.

“The Nigeria Football Federation and this team are indebted to you for your huge support all the time. Your love and keen interest has contributed much to keep this team going and reaching for higher heights.

“I must note that we are lucky to have a manager like Rohr who himself is calm, focused and very dedicated to his job, as well as a captain like Mikel who is very humble and God-fearing. The sky will be the limit for this team.”

Mikel responded on behalf of the team, thanking the Senate President and pledging that the Eagles are going to the World Cup in Russia to do Nigeria proud.

Pinnick then announced to the team Saraki’s gift of $50,000 to the team ahead of Saturday’s friendly with England’s Three Lions at Wembley Stadium in London, and yet-to-be-revealed ‘special package’ for the entire team “for every unreplied goal” scored at the FIFA World Cup in Russia.