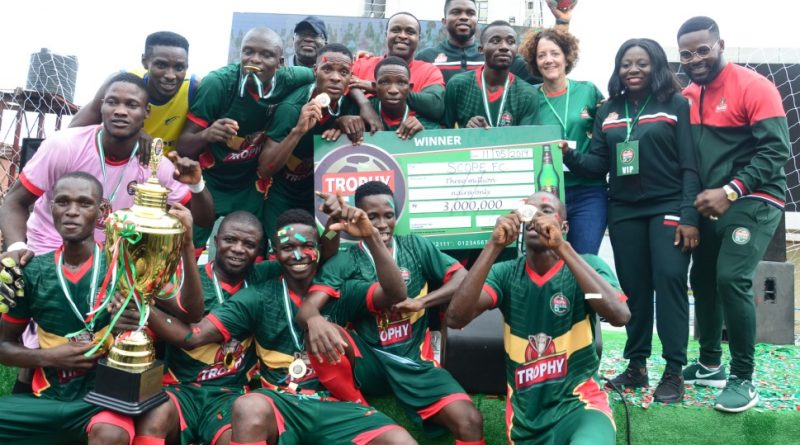 After 11 weeks of a keenly contested tournament amongst 1, 080 teams, Scope FC have won the maiden edition of the Trophy 5-a-side grassroots tournament tagged, “Field of Honour.”

The third place and finale matches took place on Saturday, May 11 at the Campos Mini-Stadium, Lagos Island. The Trophy 5-a-side tournament is a variation of association football, in which each team has five players, comprising four outfield players and one goalkeeper.

In an intensely contested final between Scope FC of Lagos and Ifayemi FC of Ile-Ife, Scope put up a good fight, getting a well deserved 2-0 win over Ifayemi FC in the second half after both teams failed to score in the first half.

She said: “International Breweries is very proud of Scope FC as they embodied the true Trophy values by tackling each challenge with panache, tenacity and zeal to win. With this tournament International Breweries has created an avenue for our consumers to talk about their favourite sport and be a part of it.

“With former Super Eagles Captain, Joseph Yobo as the tournament ambassador, Trophy continues to be associated with football, a sport most acknowledged for encouraging team spirit.”

Scope were presented their cash prize of N3 million. They will also be given the opportunity to meet Samuel Eto’o, renowned African football superstar and participate in the continental finals taking place in Tanzania later this year. Third placed team, Amsterdam FC and second place Ifayemi FC were also presented their cash prizes of N500,000 and N1,000,000 respectively.

Although this maiden edition did not get to the six geopolitical zones, the selection process of the super fans who will accompany the Nigerian team to Tanzania was conducted nationwide with winners selected through a raffle draw during the finale. Four super fans have now been selected to accompany the winning team on an-all expense paid trip to Tanzania.

“In these 11 weeks of the best of 5-a-side football, we have witnessed grassroots football development that is second to none. This maiden edition had teams drawn from Ogun, Osun, Oyo and Lagos States,” she said.

“The Trophy 5-a-side Field of Honour campaign has showcased the strength of the Nigerian spirit. All the teams exhibited great sportsmanship, looking out for one another on and off the field. Our consumers love football, and now, just by being loyal to the brand they have jump-started what might eventually blossom into a long career in the game.”

Captain of the winning team Folorunsho Sunday expressed his gratitude to International Breweries for providing such a platform for youths to showcase their skills. “We are super happy to have emerged the final winners and confident that we will win the overall tournament in Tanzania, bringing the Trophy home.”

Trophy lager is a leading quality beer brand and one of the national treasures from the stable of International Breweries Plc, a proud part of the AB InBev family.