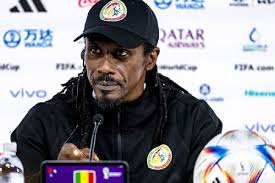 SENEGAL have suffered a World Cup blow with manager Aliou Cisse ill on the eve of their round of 16 clash with England.

The 46-year-old has been unwell for the last couple of days and did not take his side’s pre-match press conference.

He also missed training on Saturday, with assistant Regis Bogaert having to step in, thesun.co.uk reports.

Speaking ahead of the last-16 match between the Lions of Teranga and the Three Lions, Bogaert remained optimistic that Cisse would be able to take the team tomorrow night.

He said: “Aliou Cisse is sick and he had a bit of a temperature so that’s why we had to be careful with his situation.

“He’s been sick for a couple of days now and he let us take charge of training yesterday.

“Obviously with his instructions that we got across to the players and hopefully tomorrow he will be able to come and be on the bench with the players.

“But we are sure that at 10pm tomorrow he will be there with the team.

“Beating England would be a tremendous achievement. I don’t know how important it would rate compared to the victory in 2002.

“But if we can beat a team like that, it sends out a strong message about the progress we have made.”

Defender Youssouf Sabaly and Leicester midfielder Nampalys Mendy have proved their fitness ahead of England, who are fifth in the Fifa world rankings.

But the game comes too soon for Nottingham Forest’s Cheikyou Kouyate.