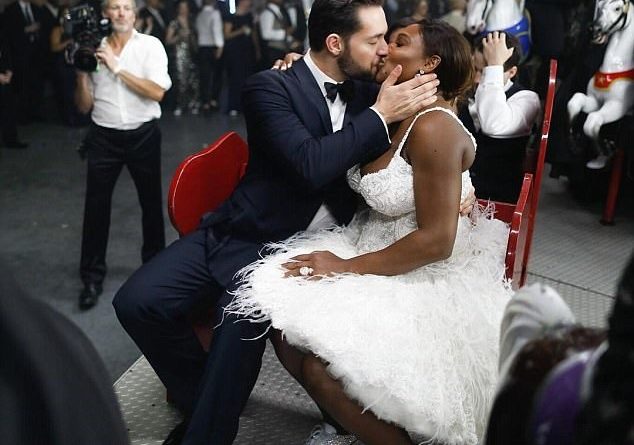 New reports are claiming that Serena Williams, 36, and Alexis Ohanian, 34, could be getting their £26,000-per-week luxurious honeymoon in the Bahamas for free – or even getting paid for it.

The MailOnline reports the newly-wed couple are staying in a luxury villa at the Kamalame Cay island resort in the Bahamas, and have shared an array of envy-inducing social media snaps, leading to speculation they are promoting the luxury venue.

However TMZ claims the couple, who recently welcomed baby Alexis, are getting the plush getaway for free, or getting ‘paid to endorse it’.

‘All signs point to Serena getting either paid or a huge discount for the endorsement,’ the site writes.

On Tuesday Serena offered her fans a tantalizing look inside what she described as her and Alex’s ‘perfect honeymoon villa’ on a private island in the Bahamas – as she slipped in a plug for a popular travel website.

The tennis ace and new mom posted on her Instagram page a brief video shot by her husband’s drone equipped with a camera, which shows a sprawling beachside lodge nestled among palm trees, set against a postcard-worthy tropical sunset.

As the camera zooms in on the two-story, $35,000-per-week villa, Vanessa is seen posing up on the balcony.

The short clip was accompanied by a caption that read, ‘A week in paradise. Thanks @bookingcom for helping us find the perfect honeymoon villa. #BookingYeah.’

As of Tuesday afternoon, the video has been viewed more than 160,000 times on Williams’ page, which boasts 7.1million followers.

It is unclear whether Williams and her family were allowed to stay for free at the ritzy private resort, or received a discount, in exchange for the well-placed mention on her Instagram page.

In addition to the short video showing Williams solo, a still photo emerged depicting the multimillionaire honeymooners standing on the balcony together and gazing lovingly into each other’s eyes while holding matching coffee mugs in their hands.

On his Instagram page, Ohanian also shared a photo from the resort, which shows him holding the Phantom drone used to shoot the video posted on his wife’s page.

He wrote: ‘couldn’t help but fly my Phantom a bit on the honeymoon. @Serenawilliams caught me getting some spectacular shots around @kamalamecay. She just posted one of them.’

According to a People Magazine report, the video and images were taken on the Bahamian island of Kamalame Cay – a 96-acre privately owned resort located less than a mile off the world’s largest barrier reef on Andros.

Williams, Ohanian and their 2-month-old daughter, Alexis Olympia, decamped to the secluded island for a nine-day getaway after tying the knot on November 16 at a star-studded celebration in New Orleans.

People Magazine reported that the power couple’s honeymoon digs are comprised of the 3,600-square-foot Magnolia villa – one of nine such accommodations on the island – that is accessible only by helicopter, private boat or a seaplane.