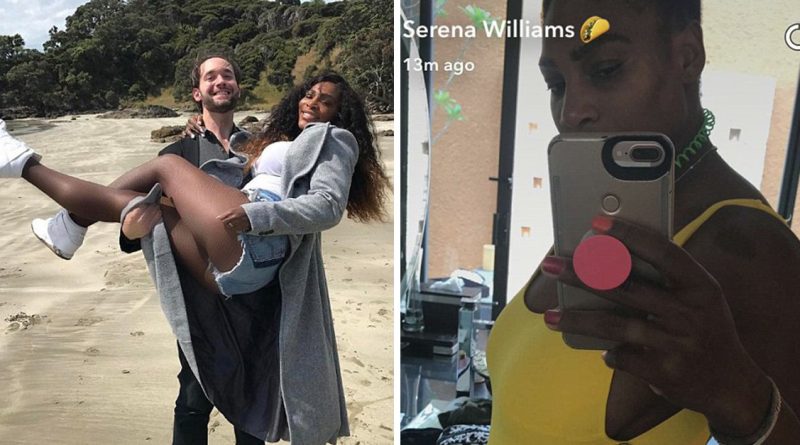 Williams wore a yellow swimsuit and said she was 20 weeks along. The athlete is engaged to Reddit co-founder Alexis Ohanian, 33.

Serena had a small baby bump, which she showed in profile as she held up her phone to a mirror. The suit had two gold buttons and a cut out on the side with narrow straps.

The beauty has been engaged to Alexis since December 2016. He proposed with a large diamond ring, which she showed off in January. They had been dating for only 15 months.

“It feels good,’ she said of the engagement in January.

“I really haven’t thought about it too much, because I wasn’t even really gonna think about it until after the tournament.

“So, I just keep saying, “February, I’ll start looking at the bigger picture of my life.” But right now I’m just so focused that this is all I can think about.’

She also spoke glowingly of her husband-to-be, “He’s incredibly — a really nice person,” she said.

“I think he definitely treats everyone the same, which is really cool to see. Really, really nice to see.’

Serena with more than 8 million followers on Twitter has set platform very busy with congratulatory messages and reactions. Some of them quite hilarious with a gentleman hoping he turns out to be lucky baby.

The Women Tennis Association tweeted, “@serenawilliams will have a new pride & joy to hug and call her own soon! Congratulations on the exciting baby announcement! #USOpen.”

Extrasportsnigeria.com sent their congratulations to Serena and WTA via tweet, “Another smasher on the way. Congratulations Serena.”

One of her followers, Poshrat Ⓐ‏ @anarchogypsy, queried, “Serena Williams kept her pregnancy out the press for 20 weeks. 20 weeks! I can’t keep my thoughts off twitter for 20 minutes!”

Williams, a 22-time Grand Slam champion, has been romantically linked in the past to Grigor Dimitrov, Patrick Mouratoglou, Amar’e Stoudemire, Hosea Chanchez, Jackie Long, Common, Colin Farrell, and Drake, among others.