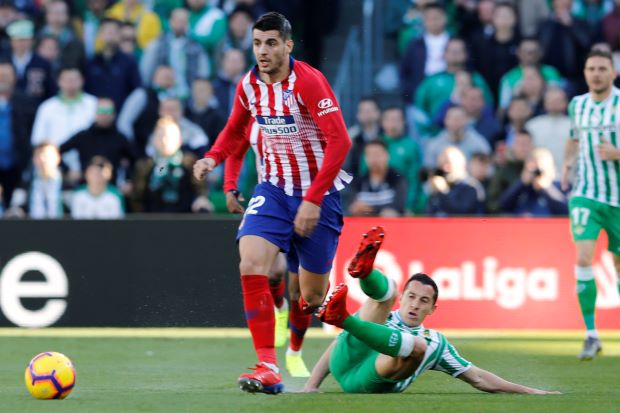 THE Spanish referee who appeared to clip Alvaro Morata on the back of the head has been banned for two matches.

Javier Alberola was involved in a controversial clash with the striker during last week’s La Liga match between Atletico Madrid and Eibar, according to The Sun report.

On-loan Chelsea star Morata was left fuming when the official seemed to clip him on the neck in the closing stages of the match.

The forward had still not calmed down by full-time of Atleti’s 1-0 victory and attempted to confront the 27-year-old official.

Morata had to be pulled back by his team-mates as he attempted to have it out with the referee in extraordinary scenes.

Alberola insisted the contact made was nothing more than a friendly pat, but it appears his bosses have not been so supportive of his stance.

The Spanish FA’s refereeing committee have decided to axe him from selection for the next two rounds of matches in the top flight.

After the match on Sunday, Morata was defended by Atletico manager Diego Simeone.

He said: “Morata was not happy. In fact, he was annoyed.

“That action reminded me when I was banned for four games when I did something similar to the fourth official.”

Atleti team-mate Koke Resurreccion added: “I had never seen a referee do something like that.

“He (Morata) felt a clip around the back of the neck and got annoyed at the referee. He is only human.

“If the referee made a mistake it will have to be looked upon. I do not know if that should be sanctioned; that is for others to decide.

“But one thing certain is that the incident has to be looked at.”