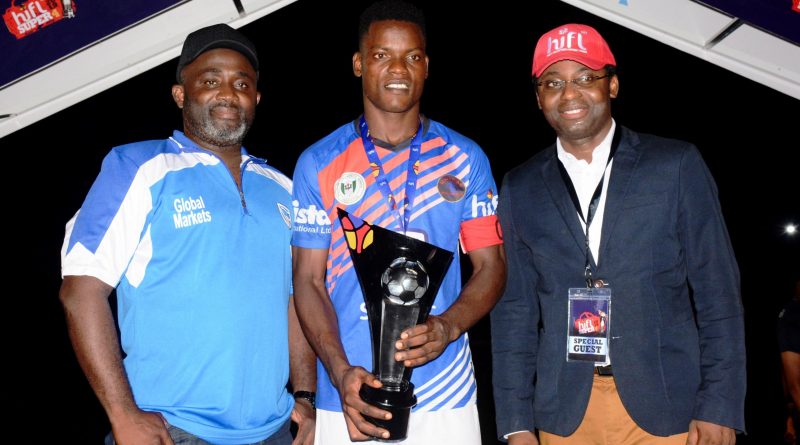 Stanbic IBTC, member of the Standard Bank Group, has expressed its satisfaction with the organisation and conduct of the 2019 Higher Institutions Football League (HiFL), which it partners as a major sponsor. Giving this verdict was Head, Global Markets, Stanbic IBTC Bank, Sam Ocheho, who represented Stanbic IBTC at the finals of the collegiate football league, which held on Saturday, October 26 at the Agege Township Stadium in Lagos.

Ocheho said Stanbic IBTC is very pleased to have been part of the success.

The 2019 finals saw a repeat of last year’s matchup both for the third-place match and for the trophy. The University of Calabar, Malabites, avenged its 2018 loss to defending champions, the University of Agriculture, Makurdi, UAM Tillers, 5-4 on penalties after a score draw in regulation time to emerge champions of the league’s second edition.

UNILORIN Warriors equally exerted their pound of flesh on OAU Giants in a thrilling third-place playoff encounter, which also ended in a draw before the Warriors emerged as winners following a penalty shootout win.

Ocheho thus commended the promoters of the competition, PACE Sports and Entertainment Marketing, for once again successfully prosecuting the league virtually hitch-free, starting from the preliminary stage down to the finals. This year’s competition has seen an expanded field, with 32 universities featured in over 66 matches to decide the winner.

“Stanbic IBTC is very pleased with the successful prosecution of the second edition of the HiFL. The organisers have managed to build on the success recorded in 2018 to put on a wonderful competition,” Ocheho said.

“As an organisation, we are known for delivering quality products and services to our customers and for our excellent people-oriented initiatives. So, we are always careful to work with partners who share our culture of excellence and adept management.”

Stanbic IBTC said its sponsorship of the league is in line with its objective to provide genuine platforms of engagement for Nigerian youths, where they can showcase their talents and more importantly foster unity among them and contribute to youth development. The sponsorship is in tandem with the company’s determination to help grow and develop a vibrant and productive youth population. Ocheho reiterated Stanbic IBTC’s expectation that its involvement will also help in talent-molding and character-building.

Earlier in the year, Stanbic IBTC Group had announced the renewal of its sponsorship of the HiFL following what it called “great promise” in the competition.

Speaking after the final match, President, Nigerian University Games Association (NUGA), one of the league partners, Prof Stephen Hamafyelto, said: “This edition has really proven that we are here for the long term. We have once again delivered on the promises we made regarding standards, discipline even fair-play, especially as it concerns delivering a bigger and better league season.”

Stanbic IBTC Holdings PLC is a full-service financial services group with a clear focus on three main business pillars – Corporate and Investment Banking, Personal and Business Banking and Wealth Management. Stanbic IBTC belongs to the Standard Bank Group, the largest African financial institution by assets and market capitalization. It is rooted in Africa with strategic representation in 20 countries on the African continent.