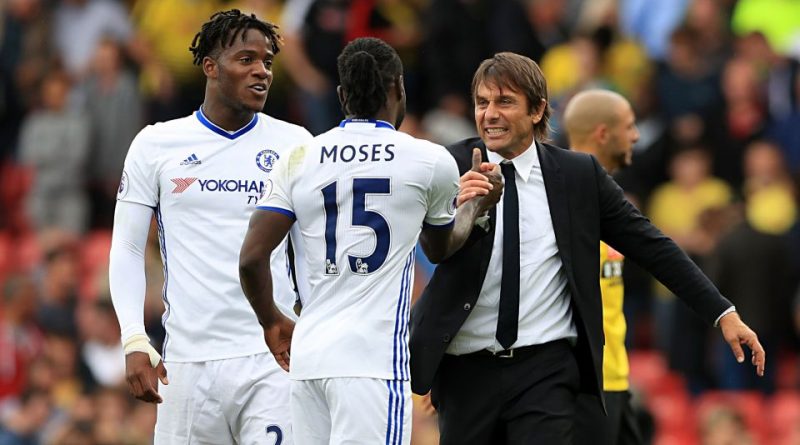 Victor Moses is back in full steam. The Nigeria and Chelsea player was in action for about 81 minutes of the game the Blues played away to Everton on Saturday reports Extrasportsnigeria.com.

The match played at Goodison Park was seen as opportunity for Chelsea to reduce the gap as measured against the top three teams but Everton stood their ground and it ended at 0-0.

Isaac Success was again not in Watford’s team to Brighton & Hove as they fell 1-0. There was hope for the Nigerian after recovering from illness.

But the real attention was at Manchester City who thrashed Bournemouth 4-0 at the Etihad Stadium.

Sergio Aguero scored two goals and brilliantly made another as the Premier League leaders racked up their 17th successive win in the competition.

There has been speculation that the 29-year-old – who is City’s all-time leading scorer – feels marginalised by his manager, and could leave in the summer.

He was left on the bench for City’s win over Manchester United earlier this month and showed his frustration by throwing his gloves to the floor when he was taken off against Tottenham last weekend.

“I understand players when they are substitutes and don’t play,” Guardiola told BBC. “They are sad and they are upset.

“But sometimes I think Gabriel Jesus deserves to play too, and Bernardo Silva or Eliaquim Mangala too. If they are not happy with me, that is not a problem – the most important thing is that they respect each other.

“I respect a lot about Sergio, about all he has done, what he has done and what he will do in the future.

“He is a legend and he will decide absolutely everything about his life and his future, and I am delighted to have him here with Gabriel and all of the squad.”