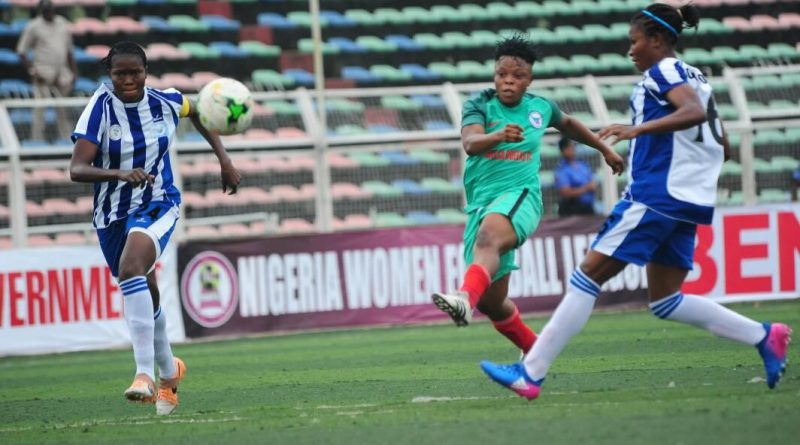 Rivers Angels coach, Edwin Okon has said his side will not be able to defend the league crown at the ongoing Nigeria Women Premier League (NWPL) Super 4 competition in Benin City, Extrasportsnigeria.com reports.

This stand follows their successive defeats at the annual prime competition in the hands of Delta Queens and Nasarawa Amazons.

The Garden City side lost by 2-1 to the Amazons in Tuesday’s clash at the Samuel Ogbemudia Stadium in Benin City – in the South-South region of Nigeria.

Nasarawa Amazons went two goals up in the first half off the foot of Adejoke Ijalonibu and gifted own goal by Rivers Angels defender, Mabel Effiom while substitute, Mercy Amanze scored the consolation for the Port Harcourt side.

Okon said his side somehow lost the clash not wholly to the opposition, but to the match officiating officials.

“We lost the match as you can see that’s a bad one to our ambition to successfully defend the league crown. It’s really bad losing two matches in a row that’s definitely not a good one for us as defending champions.

“However, officiating is something else especially in today’s (Tuesday) game. I’m always hesitant to talk about officiating but we all watched the match and could use our tongues to count our teeth,” said the former Super Falcons coach.

The second match of the day saw Delta Queens share the spoils with neighbours, Bayelsa Queens on one goal apiece.

Adebisi Saheed scored for the Asaba outfit in the 20th minute while Tessy Biawho levelled scores for the Yenagoa side.

Rivers Angels are at the bottom of the four-team NWPL log without a point and outright outsiders to defending their title. Nasarawa Amazons are at the summit on six points while Delta Queens are second on four points and Bayelsa Queens on one point after matchday 2 clashes.

Wednesday is match free day and matches will resume on Thursday.