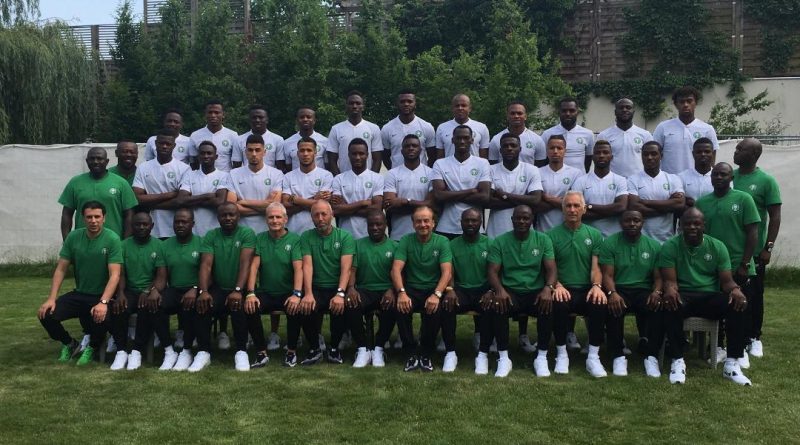 Super Eagles enjoyed Family Day and rest day at their Bad Tatzmanndsdorf training camp in Austria on Sunday. Coach Gernot Rohr granted family members access to the players as they rounded off their stay in Austria and take off for Russia on Monday, reports Extrasportsnigeria.com.

The players only trained in the morning hours of Sunday before being released from further training for the day. Apart from family visits, the Nigerian Embassy in Vienna also brought Nigerian foods for the team as part of their contribution for the send forth to the World Cup.

An official said, “What coach Rohr did came as a surprise to the whole team and officials. This was the first and only time he would be allowing such since we opened our World Cup camp in Uyo.”

Eagles will fly out of their Avita Resort to Russia on Monday for the 21st FIFA World Cup finals – their sixth appearance in seven finals since making a memorable debut in the USA in 1994.

Since emerging from an appropriately-styled ‘Group of Death’ in the African qualifying series, becoming the first African team to reach the finals in Russia, the Eagles have played against Argentina, Poland, Serbia, DR Congo, England and Czech Republic in friendlies, winning two, drawing one and losing three.

Victories over Argentina and Poland were followed by defeat by Serbia, a draw with the Democratic Republic of Congo and losses to England and the Czech Republic.

Despite the report card, Rohr insisted at the weekend, just as team captain Mikel Obi did few days earlier, that the underdog tag that has come as a result suits the three-time African champions nicely.

“We are okay with the garb of the underdog. But the defeats have done something for us – we have our heads firmly on our shoulders and we are focused.

“Together, we have reviewed the matches and learnt so many lessons. We will approach the World Cup matches differently.”