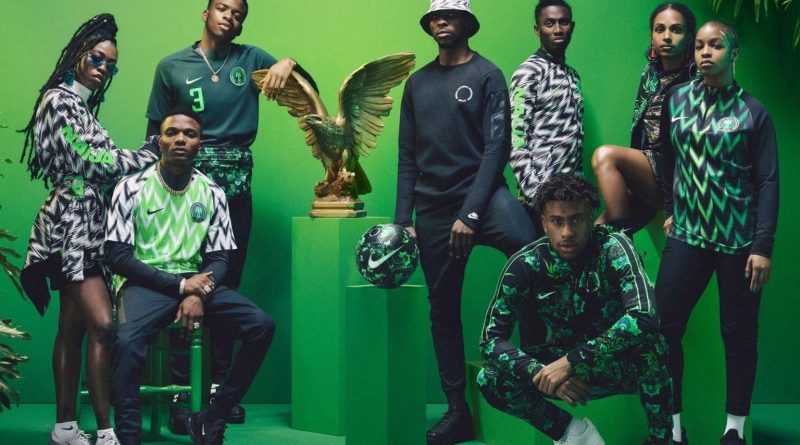 Nigeria’s much awaited new World Cup kits were sold out literally in minutes on day one as desperate buyers filed out for the jersey. The queues seen in The UK on Friday may end debates in Lagos if the Super Eagles kits were actually as much in demand as projected by the Nigeria Football Federation.

The Sun and other dailies in The UK reported that hundreds of supporters queued outside London’s Nike Town store upon its release Friday morning as they vied to be one of the lucky few to nab the jersey.

The home shirt has been labelled as one of the best kits of all time, and such was the hype surrounding the top, Nike had to push back the release date this week. In spite of the date given for the release world-wide by Nike, fake replicas hit the Nigerian market weeks ahead of the official Nike release.

It was reported that even before it officially went on sale, Nike has already received up to three million pre-orders for the £64.95 shirt, with fans loving the retro design. In Lagos and across Nigeria the jersey goes for N41,000.

It should come as no surprise that both the home and away strips are already sold out on the Nike website, as they claim there are no current plans for a restock.

Nike did grabbed the opportunity offered by the Nigerian boom as they have also released Nigeria inspired boots – the Naija Mercurial 360 – which hit the stores also on Friday.

Last month the Nigeria federation President Amaju Pinnick told Extrasportsnigeria.com that were already negotiating an improved deal with Nike and were working to seal it before the first game at the Russia 2018 World Cup.

He said, “This time around what we are discussing with Nike is an improved package beyond the kit-only deal we were offered the last time.”

Pinnick added that in the new deal, the NFF would now have direct dealings with the American sportswear manufacturer instead of going through a third party as done in the past contracts with Nigeria.

“We have been able to eliminate the third party relationship that had always existed in the dealings with Nike over the decades. This time, we are directly dealing with the world-renowned sports equipment giants unlike in the past where the packages are virtually released through the agents of the company.

“Both sides have been talking and our teams are almost concluding the draft. The target is to conclude the deal and sign before the World Cup starts and that is very possible now given the level of work already done.”

The NFF boss explained the need to tie up the deal before the Eagles start their campaign in Russia.

“A lot of events are usually lined up immediately after the World Cup and we all agree that it is best to work things out now. And we are very positive that the final result will make a lot of positive impact on the brand Super Eagles and the fortunes of the team and Nigeria as a country at the World Cup. It’s all very good. I am not sure we have ever had the kind of package we are getting this time.”

And then he beat his chest expectedly.

“We have been able to prove that the federation works 100 per cent on corporate governance as seen in the best practices all over the world. The trust has continually attracted more and more sponsors and this is all good for the Super Eagles brand and Nigeria.”

Nigeria face England at Wembley on Saturday, before facing Czech Republic in their final warm-up game before Russia.

The Eagles open the tournament with a clash against Croatia, before rounding up their Group D fixtures against Iceland and Argentina.