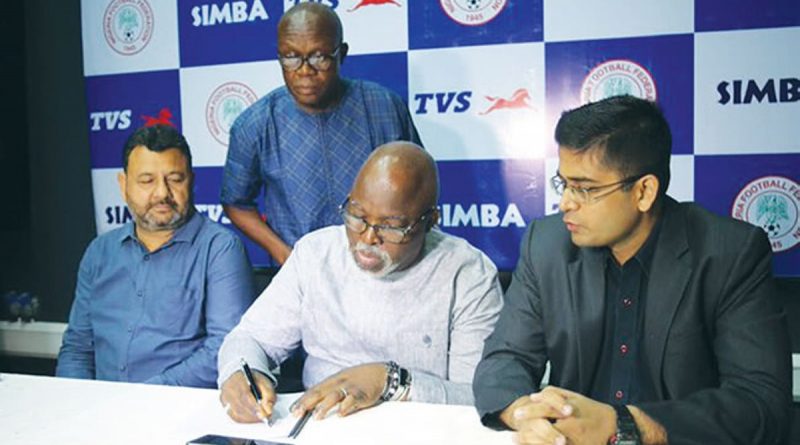 The Nigeria Football Federation (NFF) has hailed the Simba Group as “a worthy partner in the journey to make Nigerian football fulfilling for players and fans.”

NFF President Amaju Pinnick, said this at the contract renewal signing ceremony between the Simba Group and the federation in Lagos over the weekend. He said the commitment of the company to the development of Nigerian football and the Super Eagles is worth emulating.

Simba Group, distributors of TVS tricycle and motorcycle, extended its contract with the NFF for two years as the “Official Motorcycle and Tricycle of the Super Eagles” at a ceremony held at the HotSports Offices in Lagos on Friday.

Pinnick commended Simba Group for believing in the NFF and the Super Eagles.

He said, “We are happy that despite the man-made turbulence of recent time, companies like Simba have done their due diligence and concluded with a strong belief in the NFF.

“We are very happy to renew this contract with Simba for the next two years. I thank the Simba Group very profoundly. They will never regret their continuous belief in the NFF. We will do everything in ensuring that they have the desired leverage.”

Speaking for Simba Group, Mahendra Pratap, Business Head-Simba TVS assured NFF that the company remained committed to working together with the NFF to help develop football further in the country.

He said: “Like all of us here in Nigeria, we at Simba TVS are extremely passionate about football and proud of our Super Eagles. We are delighted to be extending this partnership, which will enable us work closely with the NFF, the Super Eagles and the Super Falcons.”

He added: “Fans will recall the ceremonial escort TVS keke gave the national team as they departed for the FIFA World Cup in 2018 and the Africa Cup of Nations in 2019 and several other occasions.