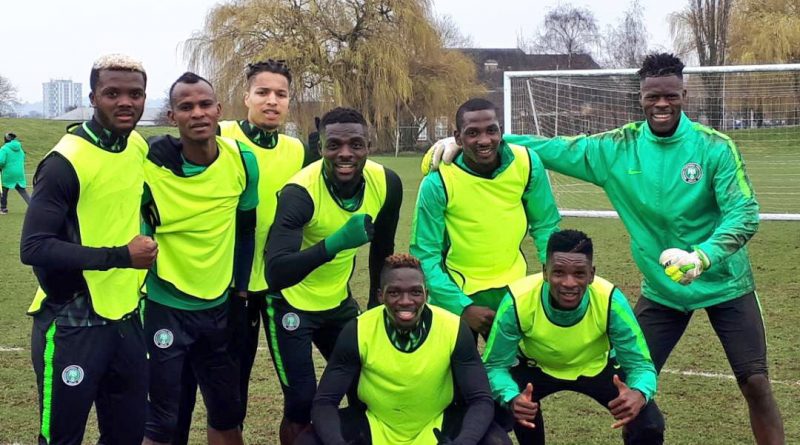 Super Eagles trained at The Hive (home ground of Barnet FC and London Bees) on Sunday morning, as countdown began for Tuesday’s international friendly with the Serbia national team at the same venue.

It was at the same venue that the Eagles battled to a 1-1 draw with Senegal’s Teranga Lions last year in a friendly with Kelechi Iheanacho equalizing from the penalty spot minutes to the end of the game.

Just like Friday’s opposition in Wroclaw, the three-time African champions will be up against another Russia 2018 World Cup-bound squad, but this time, with more playing personnel, following the arrival of strikers Junior Ajayi and Gabriel Okechukwu, and midfielder Mikel Agu. Agu was called up owing to the inability of team captain Mikel Obi to travel from China. Midfielder Oghenekaro Etebo, nursing an injury, watched the training from the sidelines.

The squad of 26 players and technical and backroom staff are staying at the Hotel Crowne Plaza Ealing.

Following Sunday morning training session, Nigeria will hold a pre-match press conference at The Amber Suite of The Hive at 6pm on Monday, 26th March. Serbia are ranked 34 in the world by FIFA (18 places above Nigeria).

Victor Moses scored from the penalty to give Nigeria victory over world number six Poland at Wroclaw’s Stadion Miejski on Friday.

At the World Cup finals in Russia, Serbia will play five-time champions Brazil, Switzerland and Costa Rica in Group E, while the Eagles battle Croatia, Iceland and Argentina.

Tuesday’s match at The Hive, Canons Park starts at 8pm.