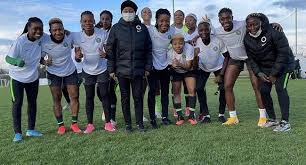 Super Falcons got their second win in their second match in the 2021 Turkish Women’s Cup as Nigeria got a 1-0 victory over Uzbekistan in Antalya on Saturday.

The African champions started the game on a high against Bakhrom Norsafarov’s side as Ihezuo almost grabbed the opener off a fine cross from Toni Payne after just 10 minutes into the contest.

At the half-hour mark, Asisat Oshoala almost broke the deadlock when she snatched the ball on the edge of the area but she, unfortunately, slipped inside the box to miss the opportunity according to Goal report.

After the restart, the Nigerian side made a fine return into the match as Oshoala provided a perfect cross for Halimatu Ayinde to open the scoring for the hosts two minutes into the second half.

In the closing stages, Rita Chikwelu and Francisca Ordega combined well before connecting with Oshoala but the latter could not end her goal drought in five straight matches for both club and country.

The win puts Nigeria on the brink of the title and moves them to the top of the group standings, with six points from two matches.

In the other result in the group, CSKA Moscow claimed their first win of the competition following a 2-0 win over Equatorial Guinea.