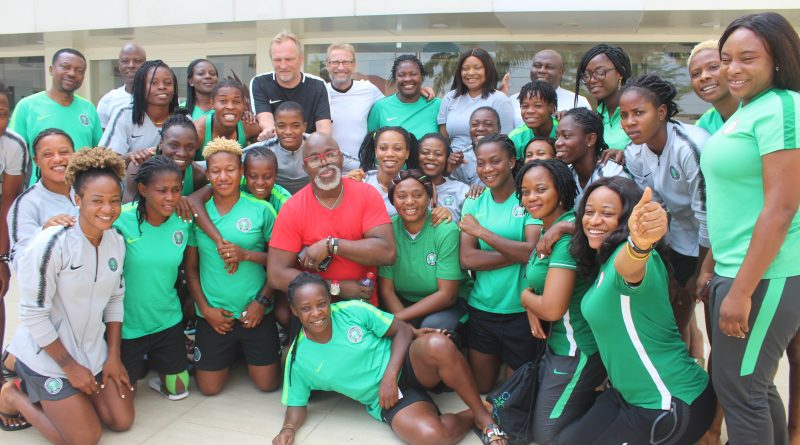 The Draw Ceremony of the 8th FIFA Women’s World Cup finals will hold at the La Seine Musicale on Boulogne-Billancourt in Paris starting from 6pm (same time as in Nigeria).

The Nigeria delegation to the ceremony, which included Coach Thomas Dennerby, NFF Director of Communications Ademola Olajire and Team Administrator Mary Oboduku arrived in Paris on Friday afternoon. They will be joined on Saturday morning by the President of Nigeria Football Federation, Amaju Melvin Pinnick, who, aside being the First Vice President of CAF, is also a Member of the Organizing Committee for FIFA Competitions.

FIFA President Gianni Infantino and President of the Local Organizing Committee (LOC), Noël Le Graët, who is also President of the French Football Association, headline the list of dignitaries for Saturday’s showpiece.

The event will be broadcast live on TMC in France, and be presented by Amanda Davies and Denis Brogniart. The Draw will be conducted by Alex Scott and Louis Saha, with the help of seven assistants.

Champions Nigeria, alongside South Africa (runners-up of the 11th Women AFCON that ended in Ghana last weekend) and Cameroon (who finished third), will fly Africa’s flag in France.

Nigeria is one of only seven countries to have qualified for and participated in all previous seven editions of the FIFA Women’s World Cup, and all seven have also qualified for France 2019. The others are Brazil, United States of America, Germany, Sweden, Norway and Japan. The Super Falcons reached the quarter finals of the World Cup in the USA in 1999.

The opening match of France 2019 will hold at the Parc des Princes in Paris (a venue for the 1998 FIFA World Cup for men), while the semi finals and final matches will be played in Lyon.