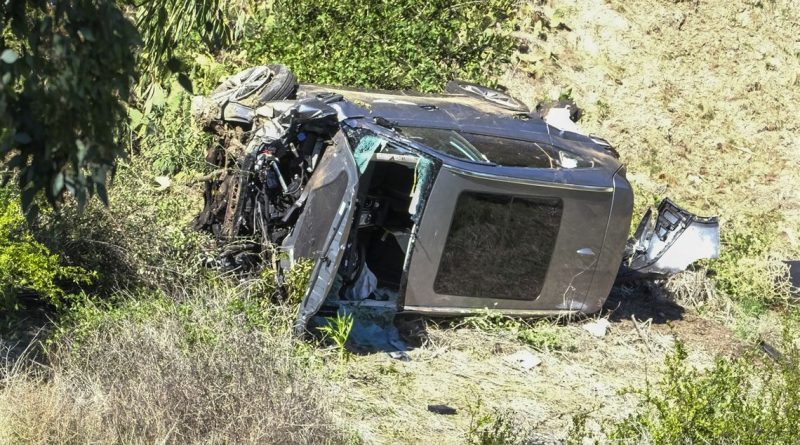 TIGER Woods was not drunk or on medication and won’t face charges as cops said the black box will be pulled from his car.

The 45-year-old golf ace had to be cut from the wreckage of the SUV he was driving before being transferred to hospital by paramedics in Los Angeles, The Sun.co.uk reports.

He had emergency surgery last night after being freed by firefighters from the mangled vehicle at an accident blackspot in Rancho Palos Verdes shortly after 7.15am on Tuesday.

Woods reportedly hit a raised central reservation at “speed”, smashed through a street sign, hit a tree and then flipped a $50,000 Genesis GV80 SUV several times.

The vehicle came to rest in bushes at the side of the road where Woods was found trapped inside the car by Deputy Carlos Gonzalez, who was alerted by a neighbour who heard the crash.

During a press conference on Wednesday morning the Deputy confirmed that Woods will not be facing criminal charges.

“We don’t contemplate any charges whatsoever in this crash,” he said. “This remains an accident, an accident is not a crime, they do happen unfortunately.”

Asked whether or not any drugs of alcohol tests were done at the scene, Gonzalez said: “The Deputy on the scene assessed the condition of Tiger Woods and there was no evidence of any impairment whatsoever.

Reiterating that he does not believe that Woods was under the influence of alcohol, Gonzalez said “he was not drunk… we can throw that one out.”

The Deputy added that there was a black box in the vehicle which will be pulled, suggesting “speed may be a factor in this accident.”

Photographs and bodycam footage was also captured at the scene and will be used for the department’s investigation.

It has been reported that Woods was running about 30 minutes late to meet NFL stars Drew Brees and Justin Herbert for a lesson and photoshoot at the time.

The star is said to have appeared “agitated and impatient” and almost smashed into a TV director’s car as he left an exclusive resort after becoming “blocked in” by another driver.

However, Deputy Gonzales said the star was calm when he arrived at the crash scene.

He said: “He was able to speak to me. He seemed calm and lucid. I kept Mr Woods calm until LA County fire department arrived on the scene.

“He told me his name was Tiger, and at that point I immediately recognized him.

“I do think the fact that he was wearing a seat belt and that the vehicle safety features worked as designed by the manufacturer likely resulted in either reducing his injury or saving his life.

“I did consider pulling him out myself, but I decided that it would be better to wait for the fire department, since they have the specialized tools and training to remove people safely from vehicles like that.”

Doctors said Woods suffered “comminute” fractures in the upper and lower parts of the tibia and fibula – meaning the breaks had led to bone splintering.

They fitted metal rods, screws and pins to his shattered right shinbone and calf bone following the crash.

Following the incident on Tuesday, Gonzalez said that Woods was not aware of the injuries he sustained.

“He didn’t mention anything. I don’t think he was aware of how gravely he was injured at the time,” he said.

“It could be a mixture of adrenaline. It could have been shock.

“Again, it was very quick – the moment I arrived from the moment he rolled over – so I don’t know if he had time to fully assess his injuries.” Girlfriend Erica Herman is thought to be at his bedside.