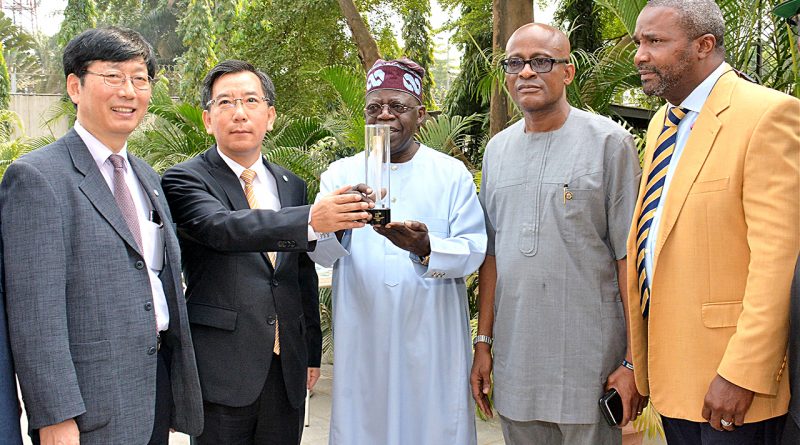 The former Governor of Lagos State, Asiwaju Bola Tinubu has been presented the 2018 Winter Olympic torch. The Consul General of the South Korea Embassy in Nigeria, Younghaon Lee visited the Bourdillion residence of Tinubu to present the model torch to him.

The Olympics, tagged PyeongChang 2018 Games, will be held from February 9 to 25.

Lee told journalists that he visited because his country saw in Tinubu a leader of repute, who commands the respect of his people.

He said, “Presenting this torch was to extend the friendship between my country and the government and people of Nigeria. More importantly, the torch represents the symbol of the Olympics, which will be held in PyeongChang County in February,” the Consul General said.”

The Ambassador said his country was ready to host the world during both the Winter Olympics and Winter Paralympics as all needed facilities have been put in place.

At the event held by the poolside of the former governor’s residence, Tinubu said he was elated with the friendly gesture from the South Korean government. He said he felt quite touched that out of many important personalities in Nigeria, he could be singled out for the honour with the presentation of the torch.

He then underlined the economic and social importance of sports to the economy.

The APC national leader said, “This torch is symbiotic and significant to promote friendship between us and South Korea. We should not forget that sport is an economic contributor to our nation. I am so happy with the qualifications of our athletes for the Winter Olympics despite the fact we don’t have winter here. We are so proud of our athletes in Diaspora for doing us proud.

“The Winter Olympics this year is also significant with the participation of North Korea as this will promote peace in the Peninsula and the whole world in general.”