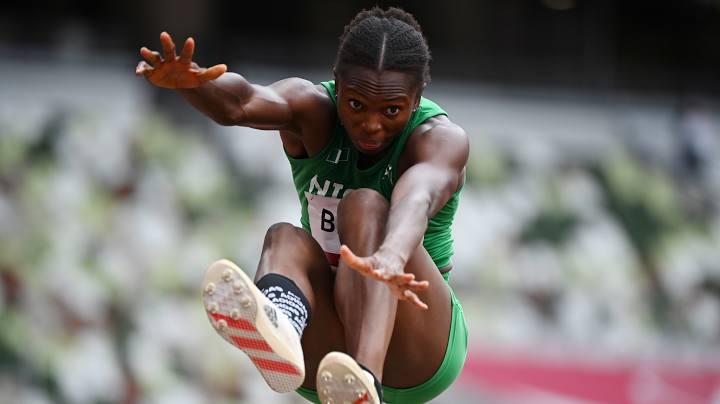 Ese Brume on Tuesday morning won Nigeria’s first medal at the Tokyo 2020 Olympics, with a 6.97m leap in the women’s long jump event.

Ese is really over the moon after winning Nigeria’s first Athletics medal since 2008.

Speaking with the press after her spectacular feat, Brume said the colour of her medal doesn’t really matter as she is just excited at having finished on the podium.

The Doha 2019 Bronze medallist said, “I’m just excited, I’m grateful. I’m super happy that I was able to make it to Top 3. I really want to thank God. I can’t contain my joy; it doesn’t matter the medal; I’m just super happy I made Top 3.”

Back in May, the three-time African Champion soared to a World Lead and African Record of 7.17m and she says that superlative feat boosted her confidence coming to Tokyo.

“Setting the African Record boosted my confidence because then my injury was still fresh yet I was able to set that record and a Personal Best, so I thought to myself that yes I could do it and my coach thought same as well, so we never settled for less.”

Brume also offered words of encouragement to her teammates that were unable to compete at the Games.

She said: “And to those who were here but could not compete, never settle for less. God is with you. It is not over until it is over. You may not have competed here today but God has a better future ahead for you.”

Brume is expected to compete in the women’s 4x100m which gets underway on August 5th.